Magic 2015 contains 269 cards (101 Commons, 80 Uncommons, 53 Rares, 15 Mythic Rares, 20 Basic Land). WotC changed the default from 60 uncommons to 80 uncommons for large sets as it makes limited play better. The default of large sets moving forward would be 269.[3] An additional 15 cards appear in the sample decks. Magic 2015 is strongly integrated with its digital counterpart, Duels of the Planeswalkers.[4][5] The set features a black / green version of the planeswalker Garruk[6] and the "You Make The Card"-card Waste Not.[7][8] The set also features a new card face with a special Magic font ("Beleren"), a holofoil stamp, revamped collector info and a decreased border size. The Magic logo for this set is colored black. The returning mechanic is convoke.[9][10]

Multiple game world VIPs were invited to create cards for Magic 2015. Their credits appear below the usual flavor text, in smaller type.[12][13]

Magic 2015 is sold in booster packs, Intro packs, a fat pack, the new clash pack (which is a 2-Player Starter Set)[14] and the M15 Deck Builder's Toolkit.[15] The boosters featured art work from Ajani Steadfast, Jace, the Living Guildpact, Nightfire Giant, Soul of Shandalar and Nissa, Worldwaker. The prerelease was July 12–13, 2014, the magic online release was on July 28, 2014 and the Game Day was August 9–10, 2014. The set was promoted at the website www.huntbiggergame.com 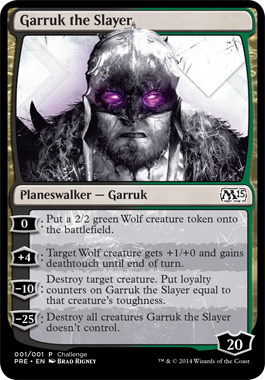 There are five prerelease packs, one for each color. Each comes with a seeded booster pack that corresponds with that color.[16] When registering for the Prerelease tournament, each player chooses one. The seeded booster pack will assist players in building a deck by providing a starting point in their chosen color. Each seeded booster pack contains a premium promo card, which players may include in their tournament decks. Each prerelease pack comes with a oversized challenge card, Garruk the Slayer, which is a key component of Magic 2015's experience design (designed by Ethan Fleischer and Gavin Verhey). The prerelease pack further contains 5 regular booster packs, 1 activity insert, 1 Spindown life counter and 3 Wolf tokens. One player plays his or her Prerelease deck as normal. This player always goes first. The other player plays as Garruk. Garruk starts at 20 loyalty, and can activate one loyalty ability each turn. Garruk can be attacked and if his loyalty reaches 0, he loses. But if Garruk's horde of Wolves drops the player to 0, then Garruk wins. The oversized Garruk Planeswalker card can't be returned to its owner's hand or otherwise removed.[17]

"Token" now appears on the type line as a pseudo-supertype. Emblems have also received a type line, which includes the Planeswalker subtype.[19]

The Magic 2015 Core Set comes with five thirty-card sample decks. Each sample deck has several cards numbered 270 and higher that do not appear in Magic 2015 booster packs. They include classics like Serra Angel, Sengir Vampire and Mahamoti Djinn. These 15 cards are legal for tournament play in any format that includes the Magic 2015 core set.[20] The Deck Builder's Toolkit 2015 contains a single copy of card numbers 270 and 272-284, and two copies of card number 271 Divine Verdict.