Even more than the previous set, Magic 2014 is strongly integrated with its digital counterpart, Duels of the Planeswalkers. In celebration of Magic 's 20th anniversary, the logo of the set has the mythic orange / bronze color instead of the usual yellow or blue.

Design and development teams were officially referred to as "Initial Concept and Game Design" and "Final Game Design and Development" teams, respectively. Although these names had previously been internally in use at Wizards of the Coast, this announcement was the first to use them in an official capacity.[5]

The set puts the spotlight on Chandra.[6] This meant a new Planeswalker card aimed at making a splash in Constructed, many Chandra-themed support cards, and flavor throughout the set attached to her persona. 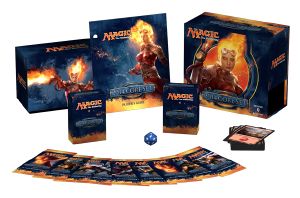 Magic 2014 was is sold in 16-card booster packs, five Intro packs, one event decks, Booster Battle Packs, a fat pack, the 2014 Deck Builder's Toolkit and a Land Station.[7] The boosters feature art from Archangel of Thune, Chandra, Pyromaster, Garruk, Caller of Beasts, Syphon Sliver and Fiendslayer Paladin. With each copy of Duels of the Planeswalkers 2013 a six card Magic 2013 sampler could be obtained; there were five different samplers, one for each platform. The 6-card boosters (the last to be released) featured art from Banisher Priest. Prerelease Events took place July 13–14, 2013. Game Day took place on August 10–11, 2013. The Magic Online release was on July 29, 2013.[8]

Regular boosters of Magic 2014 come with a bonus sixteenth card that is either a "tips & tricks card", a creature token or an emblem with an advertisement on the reverse side:[9]

M14 has one top-down designed combo.

Each intro pack includes an appropriate card from the Wizard Stave cycle.