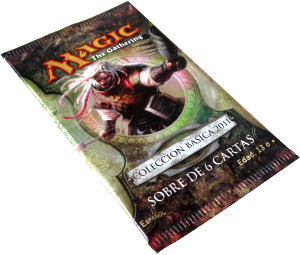 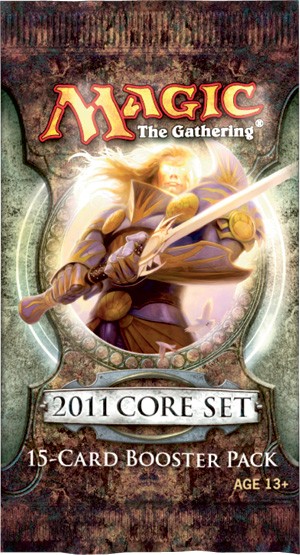 A promotional version of the new card Sun Titan was given out to players at the Prerelease event. The promotional card for the launch party was the new card Ancient Hellkite.[7] The Buy-a-Box promo was Birds of Paradise. The Magic 2011 Game Day was held on August 14–15, 2010. At this event the DCI-Promo-Card was Liliana's Specter and the Top 8 Finish reward was a full-art foil Mitotic Slime.

Regular boosters of Magic 2011 come with a bonus sixteenth card that is either a "tips & tricks card" or a creature token from Magic 2011. One face of the Magic 2011 bonus card has one of nine different rules tips or is one of six different creature tokens. The other face has one of 13 advertisements for organized play programs, Scars of Mirrodin, Duels of the Planeswalkers for Xbox Live, Magic Online, fat packs, the Planewalker Novel - Test of Metal, the movie The Sorcerer's Apprentice and Ultra Pro products for Magic. The advertised movie had a Magic tie-in.[8]

Like Tenth Edition, Magic 2011 came with free sample decks made from 30 commons and uncommons.[10]

Magic 2011 uses all the evergreen mechanics except for double strike and intimidate. The mechanics flash, regeneration and shroud each appear on only one card, either an uncommon or rare. Magic 2011 is the first core set to use a non-evergreen mechanic, scry, which would not appear in the next core set Magic 2012.[3][11][12][13]

Magic 2011 reprinted the white, blue and black members of the hoser cycle from Magic 2010, as they were widely used as sideboard cards.[19] Red and green get new, more powerful hoser cards to deal with their enemy colors. Green also gets Plummet, one of the most efficient anti-flying hosers ever printed.

Plummet, along with red's hoser Combust, appear to be directed specifically at combating the powerful Baneslayer Angel - though they do serve other functions as well.

As of Magic 2011, intro packs would again be sixty card decks, rather than the 41 card decks they had been since Shards of Alara. They still came with a 16-card booster enclosed.

The card Ancient Hellkite was the promotional card given out at release events; it is also available as a foil in the theme deck Breath of Fire.

Apart from the two cycles of planeswalker's spells, Magic 2011 contains a number of new cards that pay homage to Magic's past: