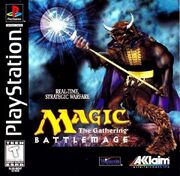 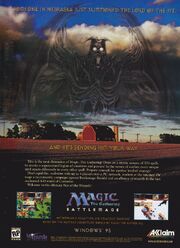 Someone in Nebraska just summoned the Lord of the Pit

Magic: The Gathering - BattleMage was an early Magic computer game by Acclaim Entertainment. It was published on November 1, 1996 [1] and became commonly available in January / February 1997.[2] Though the game itself was not popular, its rich storyline recounting the Planeswalkers' War was one of the major events in prerevisionist storylines.

A devastating planeswalker war rages across the continent of Corondor. Ravidel, a mighty planeswalker, has gone insane from grief and betrayal. He now seeks the destruction of all other planeswalkers and the conquest of the land itself.[3]

Ravidel hatches a diabolical plot to lure the universe's most powerful wizards to Corondor, trap them there, and force them to battle each other until they are weak enough to be picked off one by one.

Three of these wizards are Conquerors, who wish to take the mana-rich land for themselves. The other three are Defenders, who seek to protect the land and the people of Corondor from this onslaught.

Thus begins Acclaim Entertainment's Magic: The Gathering-BattleMage, a war of wits and wizardry that pits up to four players in head-to-head combat. Players face off on one of 30 richly detailed battlefields of varying terrain. Every spell, artifact, enchantment and creature is enhanced with stunning graphics, and each creature summoned in the game can be commanded to attack the enemy or defend an oncoming assault.

Acclaim's Magic: The Gathering - BattleMage offers real-time gameplay and a striking environment that immerses players into the action and drama of these magical duels. Adding time and spatial dimensions to the game are strategies such as using the terrain to protect a weak flank from sneak attack, or luring enemy forces into a deadly trap.

Magic: The Gathering - BattleMage offers gamers two modes of play. The Duel Mode allows players to build a customized army of creatures and spells based on the fantasy adventure world of Magic: The Gathering. Players duel the computer or against up to three other players via local area network, modem or the Internet. Two Sony PlayStation or Sega Saturn Gamers can take advantage of the game's split screen feature for head-to-head combat.

Players also can engage in Campaign Mode, a turn-based strategy game in which the player conquers territories and accumulates magical artifacts and spells in the midst of an epic planeswalker war. Throughout the Campaign, players interact with more than 90 beings from the Magic: The Gathering universe. These encounters can be advantageous, providing players with silver, spells, artifacts and clues; or adverse, resulting in a magical duel. Campaign Mode changes each time it is played; new spells can be found with each encounter, including the never-before-seen spells of Mirage.

The fully animated creatures and spells of Magic: The Gathering - BattleMage are like nothing hardcore Magic fans have seen!

Outtakes from the game's lore: