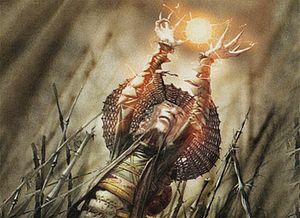 Maga (Japanese: ; literally "Calamitous Self") was a wizard from the Minamo on Kamigawa, with a passion for oni magic.

Maga bent his studies toward the oni, until the dark nature of his studies cast a shadow on his mind. He began using the Minamo facilities for foul rites and communions with the demons, until he was caught and expelled by the academy. However, his passion grew stronger.

Maga created a rite of bonding with the oni, scoring his flesh from head to toe and performing the ritual covered with his blood. The oni swirled around him, drinking the blood. Just before he slumped over, dry and empty, the oni poured into his wounds, filling him with tarry blackness, the stain of divine evil.

The darkness within him gave Maga a constant connection to the oni and their evil designs. But this power was overshadowed by the oni's influence upon the wizard, a crooked bargain that earned Maga his title of Traitor to Mortals.[1]