The Maelstrom is a chaotic storm of mana that was created in the Conflux, located at the point where the five Shards of Alara met. It was fueled by the war between those five worlds, a war that the elder dragon Nicol Bolas orchestrated. The elder dragon stepped into the center of the storm to regain his godlike powers of old. Bolas succeeded in this, but was ultimately stopped from destroying all of Alara by Ajani Goldmane. 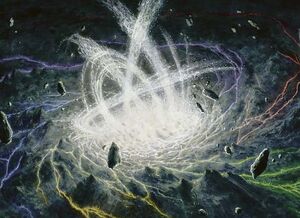