Magic 2012 contains 249 cards (101 Common, 60 Uncommon, 53 Rare, 15 Mythic, 20 Basic Lands), including randomly inserted premium versions of all cards.[3] The set saw the return of planeswalkers and the five Titans, had a minor aura theme, introduced hexproof and had several top-down designed creatures.[4][5] The returning mechanic for this Core Set was bloodthirst.[6][7] 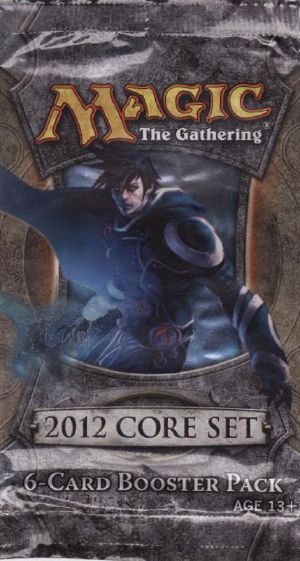 A promotional version of Bloodlord of Vaasgoth was given out to players at the Prerelease event. The promotional card for the launch party was Garruk's Horde.[12] Both cards are new to the set. The Buy-a-Box was Chandra's Phoenix.[13] The Magic 2012 Game Day was held on August 12–14, 2011. At this event the DCI-Promo-Card was Stormblood Berserker and the Top 8 Finish reward was a full-art foil Dungrove Elder.

Regular boosters of Magic 2012 came with a bonus sixteenth card that was either a "tips & tricks card" or a creature token from Magic 2012.' Unlike the traditional tips & tricks cards, they were printed in landscape format and had no numbering. The back side had an advertisement for Commander, magicthegathering.com, Magic 2012 Intro Packs, Magic Online, swagdog.com, Ultra Pro products or www.wizards.com/locator.

Many older cards would be updated in the Oracle card reference to use this new term. This was not a functional change.

Magic 2012 also introduced a new keyword in Hexproof, which is similar to Shroud except the controller of the permanent can still target it.[16] This ability used to be colloquially referred to as "Troll Shroud" in reference to Troll Ascetic, one of the first and most popular cards with that mechanic.

The set also saw the return of Planeswalkers, though it wasn't restricted to the original Lorwyn 'walkers as Gideon Jura and Sorin Markov had cards in the set. For the first time, three new Planeswalker cards were made for a core set. Like in Magic 2011, these planeswalkers had a number of cards referencing to them.

As a Core Set, Magic 2012 has a high number of reprints. Like its predecessor, a lot of its reprints already appeared in Magic 2010 and/or Magic 2011, either as new printings or reprints from earlier sets.