With Magic 2010 the naming convention for Core Sets was changed. Instead of listing the number of the edition, the set is instead named after the year after the product was released.[4][5] Doing a core set every year precluded Wizards of the Coast from doing other fourth sets, like Eventide, Coldsnap and Unhinged, but would provide a much more structured and predictable release schedule of three expert-level expansions and one core set each year. To accommodate this much more rapid core set turnover, the format rotation policy was changed. There would be only one rotation date per year, when the large Fall set was released.

The core set was getting a significant face-lift in an attempt to return it to some of its original resonant flavorful glory.[6][7] Because of this, Magic 2010 was the first core set since Beta to feature new cards, some of which had a top-down design.[8][9][10][11] Some new cards were answers to strong cards in the metagame.[12] Magic 2010 was also the first core set with planeswalkers and mythic rares. There were no legendary cards in the set, unlike the previous core set. Core sets were now equal in size and make up as the first set of a block. Thus, Magic 2010 contained 249 cards (101 Common, 60 Uncommon, 53 Rare, 15 Mythic, 20 Basic Lands [13]) instead of the approximately 300 cards of previous expansions.

Magic 2010 did not have the added reminder text about flying on creatures that have the ability that was included in 8th, 9th and 10th Edition. 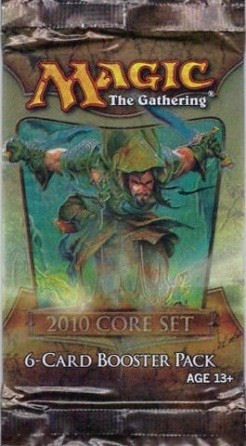 This set was sold in new 6-card booster packs, as well as the standard 16-card boosters. The cards were also available in 5 different Intro packs [14] and a fat pack.[15] There was no Magic 2010 2-Player Starter Set and there were no tournament packs. The regular boosters featured art from Captain of the Watch(with white background), Sphinx Ambassador(with blue background), Xathrid Demon(with black background), Kindled Fury(with red background) and Cudgel Troll(with green background).[16] The 6-card booster featured Borderland Ranger.

Because the set contained new cards, a prerelease was held for the set, at which a promotional version of Vampire Nocturnuswas given out to players.[17] The promotional card for the launch party was Ant Queen, also a new card. The Magic 2010 Game Day was held on August 14–16, 2009. At this event the DCI-Promo-Card was Naya Sojourners, and the Top 8 Finish reward was a full-art foil Mycoid Shepherd.[18] Magic 2010 was the first set to feature a Buy-a-Box card, a foil alternate art card given away for purchasing a booster box at certain local stores. This was Honor of the Pure.

The regular boosters of Magic 2010 come with a bonus sixteenth card that is either a "tips & tricks card" or a creature token from Magic 2010. One face of the Magic 2010 bonus card has one of fifteen different rules tips or is one of eight different creature tokens. The other face has one of 13 advertisements for organized play programs, Zendikar, Duels of the Planeswalkers for Xbox Live, Magic Online, fat packs, From the Vault: Exiled and Ultra Pro products [19] for Magic.

Many rule changes are implemented with Magic 2010, the most changes since Sixth Edition core set changes.[20][21]

Most of the changes implemented were explained by Wizards of the Coast as simplifying the game, making it easier to learn, and cleaning up some counter-intuitive game states, such as a creature dealing damage when it is no longer on the battlefield. The introduction of new terminology was also meant to lessen confusion and making certain things more explicit.

The announcement was met largely with mixed to negative reactions from the competitive player base, which felt that the game was dumbed down due to the removal of damage on the stack and to a lesser extent mana burn. It was also noted that certain cards such as Citadel of Pain became functionally useless due to some of the changes, and that other cards, such as Wishes, lost significant functionality.

Director of Magic R&D Aaron Forsythe admitted that the rules changes to Deathtouch were rushed as no quick solution was apparent to make the ability work after the rules change to the blocker assignment the same way as it did before. This led to another update of the Deathtouch rules with the release of Magic 2011.[23]

For the first time, intro packs in a core set are two colored instead of the usual mono colored decks.