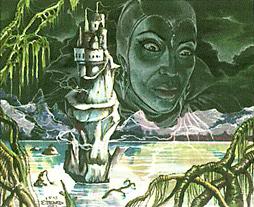 Princess Lucrezia was a legendary human wizard, who ruled a city-state of the same name in south-western Jamuraa, four centuries after the Ice Age.

Her city was constantly at war with the shah of Fysmatan, another portual city on the shore of the Sea of Serenity. Lucrezian marines, an elite unit of her navy, were one of the most disciplined forces to sail the sea.

During one of the numerous wars between Fysmatan and Lucrezia, the latter was also opposed by the Robaran Mercenaries, lead by Adira Strongheart. After having found out that Lucrezian marines had enslaved a tribe of island natives in order to build a flotilla of war ships, the Robaran Mercenaries attacked the marines and freed the slaves, selling the new ships to Fysmatan.[1]