From MTG Wiki
(Redirected from Logo)
Jump to: navigation, search 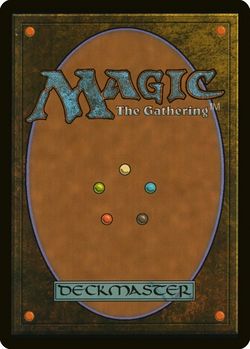 The classic card back

The card back is printed onto the back of each Magic card, except double-faced cards and Contraptions.

The back of every card is identical, with the exception of commemorative sets. The card back features the original blue version of the Magic: The Gathering logo, a representation of the color wheel and the word "Deckmaster" at the bottom, all on a brown background with an oval shape meant to represent the cover of your book of magic spells.[1] It was designed and colored by the original art director for the game, Jesper Myrfors, together with Christopher Rush.[2]

Until the release of double-faced cards, no legal card could have a different print on the back than the regular Magic card back. That is also the reason that the back stayed unchanged during the 8th Edition revision of the card frame.

According to Mark Rosewater, the topic of changing the card back "comes up every couple years [internally at Wizards of the Coast] but so far the status quo has always won."[3] The internal reasons to change the card back include updating the logo and trademark, removing the obsolete reference to "Deckmaster", and design updates to match the modern card face design.[1] Regarding concerns about the effect on players of changing the card back, Mark Rosewater noted that "[d]ata shows that very few players play constructed without using card sleeves".[4] He also said:

The change would have zero impact on limited formats and would only affect Standard for a year. It would have an ongoing impact on formats with older cards, but the mere fact people are playing with older cards greatly increases the chances that they play with sleeves already.[5]

However, as of 2017 Wizards of the Coast had no plans to change the card back.[5]

Originally it was planned to feature different backs for Arabian Nights and each following expansion but this was infeasible as people would be able to tell which card they would probably draw next depending on the ratio of cards from each expansion in their decks.[6]

For the Tempest set, design briefly considered creating cards with draw triggers that had different backs so the opponent would see when such a card was drawn.[7]

In 2001 or early 2002 the word "Deckmaster" was almost trademarked "without thinking of the ramifications the change would have on the game, namely that players could cheat by using lands that didn't have the extra trademark and spells that did, or vice versa." This problem was recognized in time and the change prevented.[8]

On April Fools' 2004 Wizards of the Coast jokingly announced that due to a trademark challenge by the Orlando Magic of the National Basketball Association, the name of the game would be changed to Magique: the Gathering. To solve the problem of mixing different card backs for casual and tournament play, the company had decided to run a limited print run of each previously published Magique: the Gathering expansion with the new card back.[9]

Since the card back cannot change, it features some imperfections as the logo is the older, blue version while everywhere else the logo has been updated for yellow with red trim. After the blue version was locked on the card back, the brand team realized that blue was a poor choice for packaging and advertising.[10]

The only paper cardbacks with the updated yellow logo are the oversized Commander and oversized Planechase cards. The idea is that as long as all the oversized cards have the same back, even if it’s slightly different, it doesn’t matter.[11]

When Magic was first designed, Wizards of the Coast had plans for a series of trading card games. To group these games together, they were all given the name Deckmaster. Magic, Jyhad (renamed Vampire: The Eternal Struggle), Netrunner, and BattleTech were all Deckmaster games.[12] Wizards of the Coast eventually abandoned this method of grouping their trading card games, but the Magic card back is locked so the Deckmaster logo remains.[10][13]

The "T" and "R" in Deckmaster overlap a blue pattern which was initially believed to be a ballpoint pen marking introduced to the logo before the printing[14][15], but according to Jesper Myrfors this is not the case, as the Deckmaster logo was created with the same textured process as the blue card border.[16]

On the battlefield[edit | edit source]

If a permanent on the battlefield is turned face down by a spell or ability, it becomes a 2/2 face-down colorless creature with no text, no name, no subtypes, no expansion symbol, and no mana cost. A card that enters the battlefield face down also has these characteristics.

A double-faced card's back face is indicated by the transformation related icon (often the moon symbol) in its upper left corner.

In the digital Duels of the Planeswalkers, the “Deckmaster” logo has been removed. Also, the Magic: The Gathering logo has been changed from blue to yellow.[17] This is also the design used in Magic Duels, in Magic Online, and on physical oversized cards. There are also official card sleeves with this design.

Challenge Decks have different card backs, which indicate that they can't be played in regular decks.

Hero cards and most tokens both have advertising on their card backs, to indicate that they are to be kept separate from all decks. Some token cards, however, may be double-faced to represent two different token permanents.

Contraptions have a special card back to show the sprockets and the rules of the CRANK! counter.