Locthwain is the black-aligned court of the Realm on the plane of Eldraine.[1] 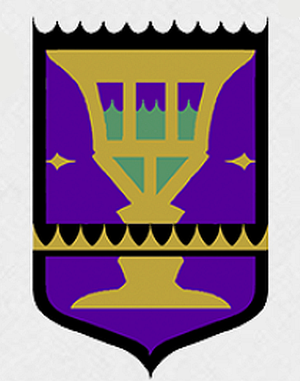 Locthwain's symbol is a goblet.

Locthwain's court is noble and graceful.[2] The courtiers wear elaborate headdresses and elegant attire. The court is ruled by Queen Ayara, an ancient elf from the days of the Elven Kingdom on Eldraine.[3] She remained as ruler, rather than withdraw with her brethren into the Wilds after the elven courts had lost their hold on the Realm. Locthwain exemplifies the virtue of Persistence, and used to be home to the Cauldron of Eternity before it vanished. The Cauldron of Eternity can return those who die back to life if it deems them worthy.

Lochtwain is home to the Blacklance Paragons and the Order of Midnight. The Blacklances travel deep into the Wilds, sometimes for years at a time, in search of the lost Cauldron. The elite knights of the Order of Midnight fly on giant ravens.[4] The knights of Locthwain are haughty, believing themselves superior to other knights by their devotion to the highest virtue. They are pragmatic enough to flee a losing battle, but their persistence ensures that they will find some way to return and defeat their enemies. The highest aspiration for a Locthwain knight is to become worthy of undertaking the quest for the Cauldron of Eternity and wed the queen before setting out on the quest.

The magnificent Castle Locthwain floats aloft on a vast billow of clouds and can be moved at its Queen's whim. The castle sails with slow majesty, as much ship as a fortress, its central tower fluttering as with sails because of all the pennants affixed to its spires. Locthwain had been forced aloft long ago by the curse of having lost the embodiment of its precious virtue, the missing Cauldron of Eternity never found even after many generations of searching by Locthwain's persistent knights and others looking for healing and its fabled promise of immortality.

The weather beneath the castle varies between a light drizzle and a thundering storm, depending (or so it is said) on the mood of its queen. It can settle down to earth, either on land or water, and the same magic that holds it aloft can lower its knights down to the ground on smaller, temporary rainclouds. The interior of the castle is a labyrinth of narrow passages connecting great halls. It is suggested that elven magic contributes to the sense of disorientation and, eventually, the terror that claims those who become lost in the castle.