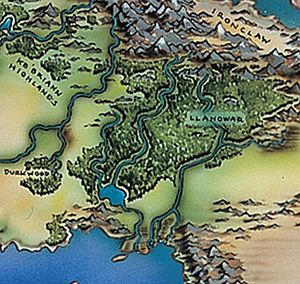 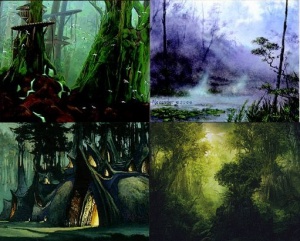 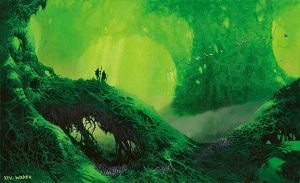 Llanowar is a gigantic lush forest region in South Aerona, southeast of Benalia on Dominaria.[1][2] It is bordered by the Kb'Briann Highlands, the Durkwood, the Ironclaw Mountains and the Erg Mirab.[3]

Llanowar ranges in width from several hundred miles to over a thousand miles at its widest point. This vast and ancient forest is populated by the Llanowar elves, fierce beings who are very reclusive (some say xenophobic). Redwood treefolk live in the heart of Llanowar, and aboroths are powerful elementals that grow from the soil and terrorize the elves on occasion. The forest is known to goblins as the Forest of Death. Mirri, a cat-warrior who was trained in magic together with Gerrard, lived for a while in Llanowar.

Some scholars claim it is the tremendous size of the forest that has long protected the Llanowar elves, but although it is quite vast indeed, it is not in any way unique in its size. The elves in Llanowar divide themselves into tribes, or elfhames. There are seven of these elven kingdoms contained within the forest realm. Each elfhame has a distinct populace, territory, leadership and social structure. They differ from communal treetowns to tribal matriarchies. Although most of them get along with one another, there is occasional strife between them. The uniting imperative is to protect their homes from the orcs and goblins of the Ironclaw Mountains.[4]

Since the Ice Age, the Llanowar elves have had to protect their forest from the ravages of outsiders seeking precious firewood. Though they do have some contact with their neighbours, they have done a remarkable job of keeping other peoples and cultures from influencing their home. They maintain a strict belief, grounded in religion, that they must keep some distance from other peoples in order to retain their mystical connection to nature and their forest home. The Llanowar and the Shanodin dryads share a deep respect and connection despite the tremendous distance (several thousand miles) between their forests.

With the help of Freyalise the elves of Llanowar managed to keep their cultures intact throughout even the most difficult of times.[7] This isolationist philosophy is taken to its most extreme by the Order of the Steel Leaf, a select cadre of elves said to have been brought together by Freyalise herself. The beautiful half-elven planeswalker is considered a goddess by the elves of Llanowar, who are unaware of her heritage. The Steel Leaf are zealous to maintain the purity of Llanowar. Any non-native entering their territory risks their life in doing so. They have even been known to direct their isolationist zeal against elves of other elfhames.

During the Phyrexian Invasion of Dominaria, all Llanowar rallied around Eladamri's banner and united in his name.

Llanowar was one of the first Dominarian regions that was rejuvenated after the Mending.[8] Due to the casualties suffered during the Invasion and the Rift Era, half of Llanowar's current population consists of adolescents, aged sixty or below.