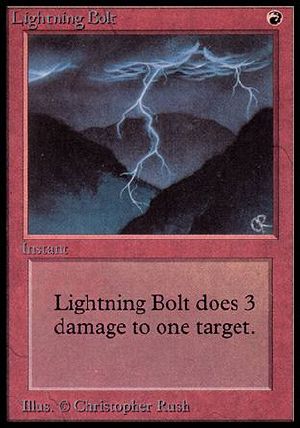 Lightning Bolt is one of of the five Alpha boons. It was recognized to be very powerful and influenced the evolution of Magic in significant ways.

Early on, there were decks comprised of forty copies of Lightning Bolt supplemented with twenty Mountains, which was a leading contributor to the "four of one card" rule. This card reins in dangerous early creatures like Hypnotic Specter and can deal the final three damage for the win, while killing creatures with three-toughness and below throughout the game. Sometimes creatures are specifically designed to be "out-of-bolt" range by having a toughness of 4 or more. Almost never a dead draw, Lightning Bolt set the standard for burn for a long time with weaker imitators like Chain Lightning and Incinerate, before being replaced by the toned-down Shock.

After being out of core sets since Fourth Edition, Lightning Bolt was reprinted in Magic 2010, much to players' surprise. Several articles on the magicthegathering.com website had devoted sections to explain its revival.[1][2] Even the reprinting's flavor text alluded the surprise of this card's return (To his surprise, the sky responded with a fierce energy he’d never thought to see again.). It was also reprinted in Magic 2011. Since then, Lightning Bolt reappeared several time as a promo, in supplemental sets and compilation sets but never again in Standard. The issue is how much it warps the environment around it.[3]

"To bolt" has become the slang for dealing three damage to a target. "Bolting the Bird" is shorthand for "kill the turn-one mana dork that your opponent has played," whether they be Llanowar Elves or Birds of Paradise. A small, powerful creature that is rendered impractical to play because it attracts removal spells like Lightning Bolt is known as "boltbait".