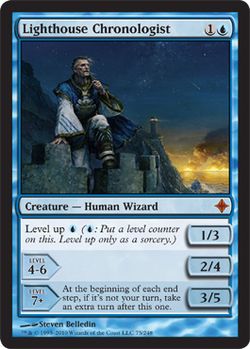 This page is about the mechanic. For the creatures from Mirrodin, see Juggernaut#Levelers.

Leveler cards feature striated text boxes, three power/toughness boxes and use the level up keyword. They are usually referred to as Levelers.[1][2]

Level Symbol
A symbol that represents a keyword ability indicating abilities, power, and toughness a leveler card may have. See rule 107.8 and rule 710, “Leveler Cards.”