Leshrac, also known as "The Walker of Night" or simply Nightwalker, was a planeswalker trapped inside the Shard during the Ice Age. 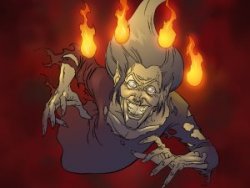 Leshrac planned to escape to the plane of Shandalar, which was moving through the multiverse and, at the time, sometimes inside and sometimes outside of the Shard. He wanted to conquer that mana-rich plane, and allied with Tevesh Szat to achieve this. They recruited Lim-Dûl to create a vast undead army, but Lim-Dûl was stopped by Jodah before Leshrac could collect his forces. He attended the Summit of the Null Moon, and was one of the planeswalkers to cause violence to erupt there. He escaped to Shandalar along with Tevesh Szat and Faralyn, but, without the planned-on undead host, was defeated by Kenan Sahrmal, the planeswalker guardian of Shandalar.

After his defeat on Shandalar, Leshrac wandered among the planes, eventually returning to Dominaria and dominating the Kush region. He was eventually tracked down by Taysir and imprisoned in Phyrexia. Leshrac was freed from this horrible prison ages later by the Mox Beacon, and fought in the Planeswalkers' War. His status and whereabouts were unknown for a very long time, until the Dominarian temporal crisis struck.

300 years after the Invasion, Leshrac returned to dark shores of Urborg. Here, he freed the Weaver King though he didn't reveal himself, claiming that he prefers to walk in the night, actually famous for it. However, he would not be the only being of the night to come to Dominaria. While taking his leisure, he was approached by the Myojin of Night's Reach, who was seeking help to stop Nicol Bolas's vendetta. She offered him a powerful artifact and asked nothing in return, trusting that Leshrac's own ambitions would accomplish her own purpose.

Leshrac played this gambit by visiting Jeska, who had come to Otaria to visit the place of her origin. He offered Jeska the mask of Night's Reach, but she rejected. However, Leshrac managed to get hold of Jeska's mind and used her for closing the rifts in Yavimaya and Zhalfir, causing great pain and losses to Teferi and his friends (the loss of Zhalfir and Multani). The Leshrac-controlled Jeska used Radha as a mana lens to close the rifts, almost killing the Keldon warlord.

Leshrac revealed his final card when he ambushed the party by the Madaran rift. Using the mask of Night's Reach, he stripped Jeska of Phage's dark consumption powers and used them to attack Nicol Bolas, who he hoped to defeat and steal his power to become the most powerful being in the Multiverse. After the elder dragon planeswalker returned, he planned to use Jeska to battle the dragon, but the Pardic planeswalker refused, apparently not under control as much as Leshrac thought. Leshrac and Bolas battled both by spells and claw, with Leshrac seemingly gaining the upper hand by paralyzing Bolas between the Talon Gates and temporarily negating his planeswalking powers at first and then began rotting his body off with Phage's powers.

Walking from world to world, Leshrac and Bolas fought and pieces of dragon body fell to each of them (Ravnica, Kamigawa, Mercadia, and Ulgrotha). When they reappeared on Dominaria, Leshrac prepared his final, killing spell.

However, nothing was as it seemed. Seconds before his coming demise, Bolas impaled Leshrac with the skeletal remains of his tail and revealed that he had defeated Night's Reach already and held her original, true mask, far superior to the one that Leshrac had. The dragon instantly regenerated himself and used the original Mask to capture Leshrac within it. Minutes after, Nicol Bolas used the mask imbued with Leshrac's power to close the Madaran rift, effectively ending the Walker of the Night's existence.