For other uses, see Legends (disambiguation).

Legends is the seventh Magic: The Gathering set and the third expansion set, released in June 1994. It was the first set to contain multicolored cards and is not considered part of any block. 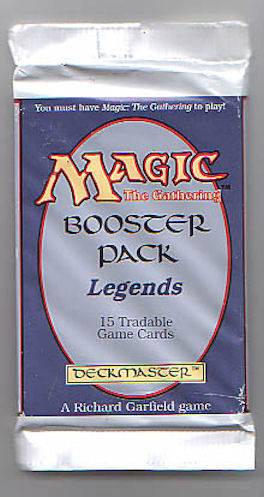 Some Legends booster boxes contained only one portion of the possible uncommon cards, while others contained a different portion.[3] These "A" and "B" boxes elicited widespread complaints from frustrated players and collectors; Wizards of the Coast responded with the Legends Exchange Program, allowing consumers to trade in up to 100 cards from one group of uncommon cards for an equal number of cards from the other group.[4]

The Legends lands have a unique golden colored text box.

Legends was the first expansion set to be sold in booster packs of 15 cards (previous expansions had been sold in packs of 8). Cards were available from mid June 1994 through late June 1994. The print run was announced by Wizards of the Coast at 35 million cards. Each booster pack had the same simple Magic design on it; each pack included a rules card, which explained all the abilities and card types introduced in the set, and also included a few rule clarifications. Even though it was a 310-card set, Legends did not contain basic land and was not considered a "stand-alone" expansion. Hence, there were no Legends starter decks.[5]

Legends is the oldest Magic expansion that was released in the Italian language (though the Italian The Dark was released earlier). After Legends was released, it went on to win the GAMA Award for best game accessory of the year, in 1994.[6] 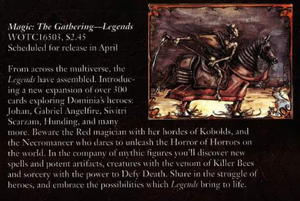 Legends was designed by Steve Conard and Robin Herbert in Vancouver, after they were introduced to an early version of Magic by Richard Garfield at the University of Pennsylvania. They quickly became addicted and started making their own cards for fun on their own time, based on the epic fantasy that both of them enjoyed.[6]

Many of the ideas for Legends came from notes taken by Conard on Wizards' Christmas recreational outing to Mt. Rainier. One of those ideas was to create a more unique, heroic kind of creature that would have a sense of depth and strength. This led to the creation of legendary creatures, as well as other mythical-sounding creatures, such as Hell's Caretaker and Evil Eye of Orms-By-Gore. Many of the ideas used for legendary creatures came from the Dungeons & Dragons campaigns enjoyed by those involved.[6][7]

The idea behind the world enchantments was that they were magics so powerful, they transported the battle to another plane altogether. Also, the set originally contained six cycles of cards based on the game of chess,[8] with each color having a similar card for each of the six chess pieces; these cards did not make it into the set, although some of the abilities that were used in the theme were reused elsewhere.

The expansion was originally named "The Legend Continues", in order to pay homage to the original game, but it was shortened to just "Legends" by those involved. Peter Adkison later asked to review the set they had created, and it was quickly accepted.

Originally, Richard Garfield believed that it was all right for the larger expansions (such as Legends and Ice Age) to optionally use common cards from the original Alpha set.[6] The Ice Age expansion, which included Alpha's commons, was originally to be released after Antiquities, but Alpha was released while it was being created and it became obvious that the fans would not be pleased with rehashed commons so soon. Legends, which had all new commons, was put on the fast track to be published in Ice Age's place, which was postponed until more new cards could be created for it. Development of Legends followed, which was complicated by communication issues. As the language found on cards was not yet standardized, it was sometimes difficult for the developers, who were across the country in Philadelphia, to understand what the cards were intended to do. After a face-to-face meeting between the design and development teams, however, many cards' intentions were clarified. There was little concern over casting costs, so when an effect was too powerful or in the wrong color, instead its casting cost was increased.

The following creature types are introduced in this expansion, but they were later changed:

Legends was the first expansion set to have cycles. It has eight cycles:

All of the 55 legendary creatures in Legends are arranged in a system of "family trees" with one Elder Dragon at the top, followed by three rare legends that share each of the dragon's colors; then, each family tree splits in two branches for the two allied-color pairs in the dragon's cost; each lower branch includes three rare legends and four uncommon legends for said allied-color pairs.[10] The family trees are laid out as follows:

Each of these branches appears in two family trees.