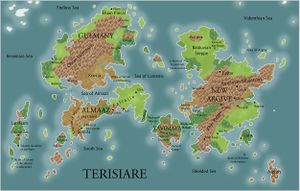 Lat-Nam was the largest of several islands west of ancient Terisiare on Dominaria. It survived all cataclysms and is now one of the five main remnants of Terisiare,[1] sometimes referred to as the Terisian Isles.

The long, small, island lies in the Ilesemare Sea,[2] west of Almaaz. Formerly it lay west of the mainland of Terisiare.[3] During the Dark Age, Lat-Nam was connected with the mainland due to decreasing temperatures and water level, but it was split off again after the Ice Age. On a mountain lies the Duler Sanctum.[4]

Lat-nam is best known for the College of Lat-Nam which was founded there. At the time of the Brothers, it was a collection of scholars from all over Terisiare and Dominaria. Its co-founders, Hurkyl and Drafna, would help to establish the Third Way, and became some of the first people on Terisiare for centuries to tap into magic.

The island would survive the war, and would go on to become the training grounds for many of the world's mages over the next three thousand years as the City of Shadows and later, the School of the Unseen.

In 4077 AR, the party of the planeswalker Greensleeves visits Lat-Nam to research the Stone Brain which was created by the Sages of Lat-Nam.[5] They find it to be a tropical island, covered by scrub forest and a poisoned glass desert, where once the College stood. The army is quickly attacked by the Duler angels and the merfolk of the Copper Conch; after a fight, Greensleeves communicates with the angels and the merfolk, who had been tasked by the Sages to be guardians of Lat-Nam, and befriends them. The rest of the army is summoned and an excavation is started. After revealing a Dragon Engine and other traps, a tunnel is found. However, the rest of the college has collapsed and it is now underwater.

The merfolk bring Greensleeves to a gigantic sea god/elemental who call heimself the Lord of Atlantis. This creature carries the druid to the underwater portion of the College, where Greensleeves finds a skull of a Sage, to which she asks the secret of the Stone Brain. When the girl returns to the camp, she finds out that they have been discovered by Towser and the other wizards, who are attacking their army. When the wizard Haakon unleashes a fireball against her brother, Greensleeves goes mad with anger and sorrow, making the "final sacrifice" of her ideal that every live is sacred. She blasts Haakon with a bolt, then traps the other wizards in the desert and summons a Force of Nature. Absorbing the mana of the creature, which is the mana of Lat-Nam and Terisiare itself, Greensleeves becomes a godlike being and loses herself, seeing her friends and family as mere ants compared to her.

Before she can unleash her overwhelming power and destroy the isle, she is brought to her senses by Kwam, and sees that her brothers have survived the fireball. Greensleeves decides to pour all of her mana in the isle of Lat-Nam, curing the land from the poison and transforming the desert in a verdant forest, thus sacrifing her planeswalker powers.[5]

In the modern era, the island houses a campus of the Tolarian Academy.[6]