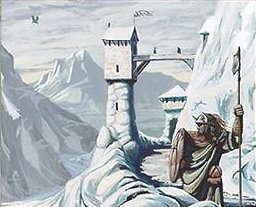 A Kjeldoran outpost. Art by Jeff A. Menges.

For the city, see Kjeld.

Kjeldor was a nation on eastern Terisiare during the Ice Age of Dominaria, occupying the general area of the old country of Argive. During the Flood Ages it merged with the lands of the Balduvian barbarians into New Argive.

Kjeldor was founded 500 years prior to the casting of the World Spell by Clan Pearl and Clan Emerald, two of the five clans of the kingdom of Storgard. These two clans had left their kingdom for they thought, correctly, that it would soon be caught under the ever growing ice caps. Kjeldor is named after Oriel Kjeldos, the old leader of Clan Emerald who died on the journey from Storgard. Her descendants became the royal family of Kjeldor.

Generals like Jarkeld and Márton Stromgald brought the nation great prestige, but over time this dwindled. The effectiveness of the nation was hampered by the fact that all decisions had to go via the monarch him/herself. A council was created as a way around this, but the various groups in the nation tried to dominate it, which led to a split in the council and further splintering led to the factionalism that plagued late Ice Age Kjeldor.

By 2934 AR Kjeldor was weak and decentralised. Royal mage Gustha Ebbasdotter had to rely on willpower and charisma to keep the various factions of wizards in control (and even that failed at times, as the Zurans split off from the general order), the nation's military was split up into many different groups and the king's policy was mainly dictated by the merchants of Krov.

This all changed when Avram Garrison, the unofficial leader of the military, became disgruntled over the state his beloved Kjeldor was in and the fact that King Darien would not unite the military and make Garrison its general. Aided by the necromancer Lim-Dûl he formed the Knights of Stromgald and attempted a coup. The coup failed and the Knights were turned into zombified minions of Lim-Dûl, but the cleansing of the military top allowed Darien to take firm control and to merge the various factions into one army led by General Varchild. With Lim-Dûl as the common enemy, Darien also managed to rally all the merchant and mage factions behind him and even made an alliance with the Balduvian barbarians with whom Kjeldor had been in conflict for generations.

After the final battle against Lim-Dûl, the alliance shattered and Kjeldor slumped back into what it had been before. Varchild herself even went rogue and formed a militia against the Balduvians. At the same time Freyalise cast her World Spell, which ended the Ice Age but also caused the rising of the sea levels that resulted in flooding and a change of climate that brought new diseases along with it. Yet in this time Jodah, Archmage Eternal of the School of the Unseen, who had also been an important player in forging the original alliance, managed to convince King Darien and Balduvian chieftain Lovisa Coldeyes to stop the fighting and work together to help their people through the trials of the Flood Age and the brief return of the ice brought on by the Cult of Rimewind.[1] This cooperation would eventualy result in the merger of the two countries into New Argive. The royal house of this new nation was created in the marriage of Alexandrite, daughter of Darien, and Lothar, son of Lovisa Coldeyes.

The main power of the kingdom lay in three city-states: Kjeld, the old capital and location of the royal summer palace, Krov, the new capital during the later days of the Ice Age and Soldev, an almost independent city located where Storgard had once stood. In the Kjeldoran hinterlands lay only small villages of which Breway, Jarka, Freyta and Mikkel were named.

The story Reprisal from the book The Colors of Magic mentions a Lord Rotchild as the ruler of southern Kjeldor. It could be that the dynasty of the Kjeldos family was interrupted for a while, or that southern Kjeldor was also semi-independent like Soldev.