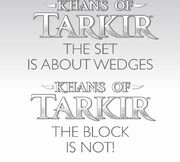 On September 9, 2013, Wizards of the Coast filed for a trademark for "Warlords of Khanar". For licensing reasons, this turned out to be renamed as Khans of Tarkir.[3] Each of the clans in the block is loosely based on a different Asian culture (architecture, clothing and so on).[4] The Mardu are based on the Mongol hordes, the Jeskai are based on the Chinese Shaolin Monks, the Abzan are based on the Ottoman Turks, the Sultai are based on the Khmer Empire and the Temur are based on shamanistic Siberian culture.

The Khans of Tarkir block has a unique draft structure: the second (small) set is drafted with both large sets, but the large sets are never drafted together.[5][6] The draft structure is the first thing from which the first set was built.[7] All three sets feature Morph or Morph-like mechanic.

Although Khans of Tarkir is a wedge set, it was explicitly denied that the whole block would be wedge oriented. Instead, the block was to be all about change, and contained a time traveling element.[8]</ref> As Sarkhan Vol traveled from the present Khans of Tarkir to the past (Fate Reforged) he changed the time stream by rescuing Ugin. He returned in an alternate present (Dragons of Tarkir).[9] The second does not contain three-color gold cards. The color identity of the cards is instead marked by the use of hybrid ability activation cost. The last set focused on Two-Color Dragon Broods.

It was said that there are elements in the storyline that may play out over a long time in other blocks.[4]

The Khans of Tarkir block has two mega cycles.

The block features several cards that reference cards from the other sets.

Renowned Weaponsmith from Fate Reforged combos with either Heart-Piercer Bow from Khans or Vial of Dragonfire from Dragons.