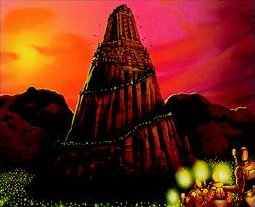 The Keldon Necropolis was one of the most holy sites in Keld on Dominaria. It housed the bodies of the greatest Keldon warlords, the Witch Kings, who were prophesied to rise up at the end of the world and do battle for the glory of Keld in an event referred to as the Keldon Twilight. In order to reach the battlefield, the legendary longboat Golden Argosy was placed atop the Necropolis to serve as the Witch Kings' transport.

During the Keldon Invasion of Jamuraa, Latulla and her supporters tried to forcibly awaken the warlords within the Necropolis to aid in the war effort. The Warlords' Council refused, forcing Latulla into ritual combat with the Necropolis's keeper, Gorsha. Latulla was defeated, and so the Witch Kings were not awakened prematurely.

Following the Rathi Overlay, the area around the Necropolis became a major battleground between the Keldons and the Phyrexians. With the aid of Eladamri and the Skyshroud elves, the Keldons tried to prevent the Phyrexians from desecrating the holy site. However, they were unsuccessful, as the Witch Kings rose up and instead fought against the living Keldons. This culminated in Doyenne Tajamin striking one of the Witch Kings with her sacred cudgel, which was so blasphemous that it triggered a volcanic eruption beneath the glacier, resulting in a massive flood. However, the real champions of Keld, the living Keldons and their elvish allies, were rescued by Golden Argosy and were transported to Urborg to take part in the ultimate battle for Dominaria, as had been prophesied.