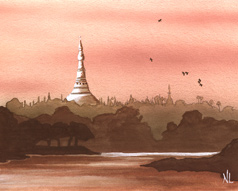 Karakas was a city on Dominaria during The Time of Legends. Travelers stopping over the legendary city were often so captivated by its rich possibilities for adventure and treasure that they forgot where they came from or where they were going.[1] Under the leadership of Angus MacKenzie, Karakas became so peaceful that battles no longer served a purpose in the city.

Karakas is located on the southeastern subcontinent of Jamuraa, on the peninsula west of the Tivan Desert.[2]

Karakas art from the Legends set depicts the Shwedagon Pagoda in Yangon, Myanmar.