Journey into Nyx has one 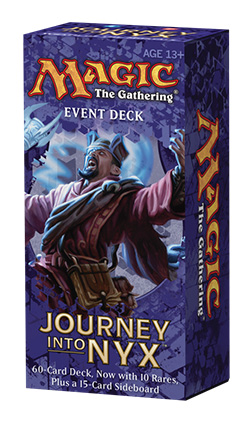 Wrath of the Mortals

The "Wrath of the Mortals" features a wide range of damage spells as well as creatures that reward you for casting them. As you blast away your opponent's forces, your creatures become more and more dangerous. Young Pyromancer and Guttersnipe trigger every time you cast an instant or sorcery, netting you additional creatures and damage. If possible, try to get these Shamans onto the battlefield before casting your other spells. Because your creatures yield more benefits the longer they stay on the battlefield, trading them with opposing creatures is usually not a good plan. Don't be afraid to take some early damage while you get set up.

Your suite of burn spells is both formidable and versatile. Many of these spells can target a creature or a player, so you'll be able to either remove problematic enemy forces or simply finish off your opponent. Flames of the Firebrand and Turn // Burn are great ways to clear out an early rush, and Battlefield Thaumaturge makes them brutally efficient if you're going after multiple creatures.

Wrath of the Mortals

1 Anger of the Gods

2 Flames of the Firebrand

2 Flames of the Firebrand

The rares in this deck are Ætherling, Battlefield Thaumaturge, Chandra's Phoenix, Ogre Battledriver, Oracle of Bones, Anger of the Gods, Fated Conflagration, Harness by Force, Mizzium Mortars and Steam Augury.