Journey into Nyx is the third and final set in the Theros block. It is the 64th Magic expansion and was released May 2014.[3][4]

Like its predecessors, Journey into Nyx has an ancient Greek themed top-down design, making use of many mythological tropes. The set contains 165 cards (60 Common, 60 Uncommon, 35 Rare, 10 Mythic) and includes randomly inserted premium versions of all cards. Fitting in with the "enchantment matters" theme, 59 of the set's 165 cards carry the enchantment type. The set introduces the Lamia creature type.

The plane of Theros is in chaos. Gods and mortals are pitted against each other, and terrifying monsters stalk the land. Heroes strive for glory while new and terrifying constellations take shape in the night sky. Supported by Ajani, Elspeth travels to Nyx and kills Xenagos. Afraid of her power, Heliod kills Elspeth.[5]

Journey into Nyx is sold in 16-card boosters (one card being a marketing card), five intro packs, one event deck and a fat pack.[6] The boosters feature artwork from Ajani, Mentor of Heroes, Pharika, God of Affliction and Cyclops of Eternal Fury . The set featured the continuation of the Hero's Path.

Random Journey into Nyx boosters were seeded to be literally and figuratively "God Packs": they contained all 15 Gods of Theros.[7][8] 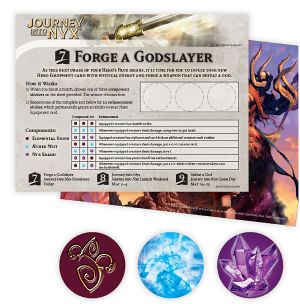 Quest 7 on the Hero's Path takes place at the Journey into Nyx Prerelease events, April 26 and 27, 2014.[9] Players will forge a Godslayer based on a favorite mana color and receive a Seeded Prerelease Pack based on that color (Forged in Glory

). The Prerelease Pack contains a Spindown Life Counter, one of five Hero Equipment cards (respectively Spear of the General, Cloak of the Philosopher, Lash of the Tyrant, Axe of the Warmonger or Bow of the Hunter), one of five quiz activity cards, five Theros block boosters, and a seeded booster featuring cards appropriate for that player's chosen path — including one of the five Prerelease promo cards. During the prerelease, players have the opportunity to win three mystical components, represented by reward stickers. Three component stickers combine in specific ways to create one of seven different enhancements. The activity card is handed in to the tournament organizer to receive the corresponding "enhancement sticker". That sticker is put on the player's Hero card in the blank space as a new permanent ability, thus forging one the most powerful weapons on Theros: a customized Godslayer.

Journey into Nyx launches May 2–4, 2014 and the month's first Friday Night Magic starts off the festivities. Players on the Hero's Path come to their stores to "Journey into Nyx" and solve a puzzle hidden within the poster included in the Journey into Nyx Launch Weekend kit. Players who solve the puzzle receive a copy of the Quest 8 Hero card (The Destined).

On May 24–25, 2014 Journey into Nyx Game Day players can use their Standard decks for the ninth quest on the Hero's Path: Defeat a God, a special Challenge Deck provided to the retailer. By winning against the Challenge deck, players win a ninth Hero card (The Champion). Players will be able to use three of the Hero cards they have collected and the Godslayer that they forged at the Prerelease to complete this final quest of the Hero's Path!

A sixteenth card in the boosters can be a token creature card, with advertisements on the back side:[13]

The following named tokens were released with Born of the Gods:

The following named tokens were released with Theros:

Journey into Nyx has nine cycles. Some cards are part of a Theros block mega cycle.

Journey into Nyx has one mirrored pair.

Journey into Nyx has one event deck.[24]