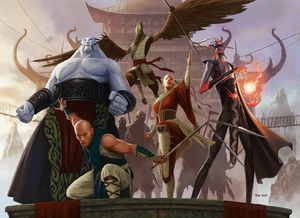 One of the five Clans of Tarkir, the Jeskai Way admires the ancient dragons' aspect of cunning. The dragon's eye is their symbol.[1] Their color wedge is

The Jeskai Way is a clan of martial artists, mystics and monks. The clan focuses on strategy over strength, planning battles against the other clans from their remote monasteries in misty mountain lakes.[4] The basis of the Jeskai culture are isolated mountain strongholds, each with its own mystical styles and schools of thought. The prime stronghold is Sage-Eye Stronghold.[5] The Jeskai believe that they alone understand the true nature of reality. As taught by Ugin, they speak of six fires that light the way to Enlightenment. These are the white soulfire, the red bloodfire, the blue mistfire, the black deathfire and the green vitalfire. While vitalfire and deathfire are taboo for the Jeskai Way, mastering the other three opens the way to the sixth fire: the colorless ghostfire.[6][7]

Jeskai Khan Shu Yun believed that the role of the Jeskai was the preservation of knowledge of the plane, acting as Tarkir's memory.[8]

In Tarkir's altered timeline, the ancient Jeskai khan Shu Yun attempted a last ditch effort at survival by summoning the four other khans of Tarkir to the stronghold, where they would devise a strategy to destroy the dragons. Unbeknownst to the other leaders, the Sultai khan Tasigur had betrayed them to the broods of Silumgar and Ojutai. The ensuing battle ended with the utter subjugation of the Jeskai, the murder of Shu Yun, the execution of all past dragon-slayers (the ghostfire warriors), and destruction of all Jeskai historical records. However, Shu Yun's personal scroll of the day's events survived, hidden away from the dragon.[8]

The Jeskai were reorganized into a new Clan headed by Ojutai and his brood, with the dragons acting as teachers to the humanoids.

Jeskai cards feature a mechanic that keeps opponents second-guessing and unsure of what you are planning.[4] This is Prowess, a triggered keyword that grants certain creatures +1/+1 until end of turn for each non-creature spell its controller casts.[9]

Relationship with the dragons[edit | edit source]

The Jeskai revered the feathered, cold-loving brood of Ojutai, who best epitomized the aspect of cunning. Their presence was the reason the old Jeskai carved mountain fortresses for protection. Specially trained monks maintained enchanted dragon bells and sound a warning when enemies approach. In battle against the dragons, the Jeskai valued strategy, using flexible weapons that entangle and immobilize their enemies. A favored tactic was to ensnare dragons with chains and weighted ropes, and then finish them off with hurled spears.[10] The most daring warriors ascended the ropes to engage the dragons in close combat. Having studied dragon anatomy, these monks attacked clusters of nerves that allowed them to incapitate even the largest dragons.[11]

The Jeskai Way is loosely based on the Chinese Shaolin Monks.[12]