Jeska was an Otarian barbarian along with her brother, Kamahl. Due to the tumultuous happenings of her life she was called Thrice Touched by Infinity.

She lived with her family in Balthor Rockfist's tribe, spending much of her time learning from the dwarves rather than the other humans that made up her tribe. For this, she was slightly shunned for her dwarven-born opinions. She lived peacefully until Kamahl left to seek his fortunes in the gladiatorial pits of Cabal City. Later, concerned for Kamahl's wellbeing, Jeska and Balthor followed Kamahl's footsteps. When Kamahl returned to the village, he was deeply enthralled by the influence of the Mirari, and during an assault Kamahl lost control and went berserk, slaying most of his kin and striking a horrific blow against Jeska. This shattered the Mirari's spell, and in deep grief, Kamahl sought out someone who could save the dying Jeska. He left her in the care of the centaur Seton, but she ultimately was captured by Braids and brought to the Cabal Patriarch. 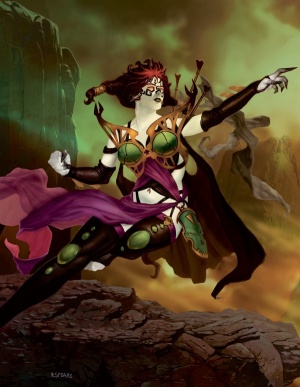 The Patriarch's attempt to destroy Jeska, instead gave birth to Phage the Untouchable through the unique combination of Jeska's planeswalker spark, The Patriarch's killing touch, and the intervention of the Numena Kuberr. Jeska was cursed so that anything she touched would rot and because of this, the only fabric that she could touch was silk, and she could only touch inorganic items like stone and steel. Phage fought loyally for the Patriarch, and due to the unique nature of their relationship, bore him a child. This child turned out to be the reincarnation of the Kuberr.

Each person that she killed formed the seed of a Deathwurm inside of her, and when touched by Ixidor's dream magic, those deathwurms were sent out into the world, leaving her once again Jeska. In order to save the land from being completely destroyed by the deathwurms, she pulled them back into herself, damning herself to a life as Phage. One wurm survived; the one that contained the essence of Nivea, Phage's first kill, and that wurm consumed Ixidor, so he could rest with his love forever.

Phage left the Cabal and joined Zagorka in Sanctum, where she was tracked down by Akroma for killing Nivea. Phage's existence ended when Kamahl intervened in her battle with Akroma, and with one swing of the Soul Reaper, he killed Akroma, Phage and accidentally slew Zagorka. The essence of the three women blended into a new being - Karona, goddess of magic.

Later, when Sash and Waistcoat killed Karona, the three women separated; Zagorka and Akroma were dead, but Jeska's latent planeswalker's spark ignited, and she ascended. It was her dormant spark that saved her from death when the Mirari, embedded in Kamahl's sword, killed Karona, and following these events, she visited many worlds of the Multiverse under the tutelage of her mentor Karn.

Centuries later, during the temporal rift crisis, Jeska appeared on Dominaria while searching for Karn. She demanded to learn of Karn's fate from Teferi and his company. When she realized the gravity of the situation, she decided to help, but upon her own terms, claiming that Teferi's methods were no method at all. She was then visited by the planeswalker Leshrac Nightwalker, who offered her an artifact of power, the Mask of Night's Reach, to help her in her mission. She refused but unknowingly fell under the mental control of the insidious Leshrac, who planned to use her dormant Phage powers to defeat Nicol Bolas.

She started in Keld, where she defeated and took Radha to use her as a mana lens for closing the rifts without the need to sacrifice herself. In Zhalfir, she closed the local rift without consulting Teferi, causing the irrevocable loss of the phased-out lands.

Jeska then took Radha to Yavimaya to close the rift there. Multani used his powers to try and influence her mind and change her aggressive thoughts, but an intervention from Leshrac's side (dreadful visions of a brutal and bloodthirsty Kamahl killing his Krosan allies) caused Jeska to break the connection and immolate Multani's physical form. Moments later, she used Radha and Multani's power to close the Yavimayan rift, seemingly annihilating Multani's essence in the process.

She proceeded to Madara. Here, Leshrac ambushed her, and using the Mask of Night's Reach, he stripped her of her legacy as Phage, her powers having lain dormant all this time, and attempted to order her to battle Bolas. Jeska refused, with Bolas's subtle assistance, and Leshrac encased her in stone to keep her from interfering. When Leshrac was defeated by the elder dragon and his essence spent to close the Madaran rift, Bolas freed Jeska, but assured her that the Otarian rift could not be closed, being too immense and powerful.

Jeska, still determined, prepared to face her final challenge. The last rift covered the whole of Otaria's skies, and was tied to her personally - it was a direct result of Karona's birth and death.

Venser and Radha assured her that they would stand by her and help her to face her nemesis. Jeska and the two planeswalkers teleported into the heart of the rift. Here, Jeska faced an image of Karona, the embodiment of the rift. Drawing power from willing friends, she changed the image of the goddess and shattered it. She spread her planeswalker essence over the rift and further beyond, over all of the rifts and fissures of the multiverse connected to it. In one huge discharge of her power, she closed them all, allowing the Great Mending to begin.

Immediately after her sacrifice, Jeska appeared in a white void, where she was welcomed by her beloved long-dead brother Kamahl. With the two siblings finally reunited, Jeska's mind happily welcomed the oblivion.

The original Phage card featured just the Minion creature type. The Grand Creature Type Update happened during Lorwyn with a small additional update during Morningtide. The extra Morningtide update changed her to a Zombie Minion. The card was changed for the reprint in Conspiracy because the creative team felt Zombie was factually inaccurate and as the card had never been printed with the word "Zombie" on it they felt okay making the change from Zombie to Avatar.[1]