Earning her name as a not-so-humble task mage and as an acquaintance of Jodah, the pyromancer Jaya Ballard witnessed many of the momentous events on Terisiare during the Ice Age.[1] After she became a planeswalker, her mastery of fire magic inspired the practice of many monks and mercenaries on many planes.[2]

Nowadays, Jaya Ballard is an elderly woman with steel-grey hair from Dominaria. Although a pyromancer, she is rather thoughtful and controlled, utilizing her flames with a clear head, making her a direct contrast to her current student Chandra (who she is teaching control). She is quite witty, coming up with sarcastic remarks about foes who find themselves on the receiving end of her flames.

Jaya's center is in red mana. As she planeswalks, she disappears in a conflagration of flame. 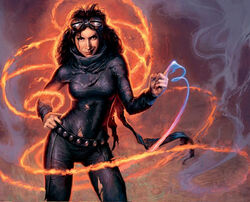 Jaya before her ascension

Jaya's childhood is shrouded in mystery, but she learned to be a thief on the streets. One day, she tried to steal something from the private chambers of Archmage Eternal Jodah but was unsuccessful. Sensing magical capabilities in her, Jodah allowed Jaya to study in the School of the Unseen, but after learning a few spells she decided to set out into the world and make a living as a task mage.

During her travels, Jaya once helped Kolbjörn and received an amulet capable of summoning Freyalise. She also was instrumental in defending a Kjeldoran village from a lhurgoyf.

Jaya later tracked Jodah to Tresserhorn after his disappearance, where he had been drugged with Fyndhorn pollen by Lim-Dûl and made to think he was a summoned creature. She rescued him, but Jodah became sick and delusional because of the pollen. Jaya summoned Freyalise, but the planeswalker wanted something in return for her aid: to use Jodah's mirror and the resources of the School of the Unseen in order to prepare for her World Spell. Although Jaya was in no position to offer her these tokens, she agreed on Jodah's behalf nonetheless.

Jaya was instrumental in Jodah's plans to prepare Kjeldor for the upcoming invasion by Lim-Dûl and the alliance between Kjeldor and Balduvia. During Lim-Dûl's final assault on Kjeldor, Jaya fought against Chaeska, Lim-Dûl's right hand. Jaya was successful in her battle, and later claimed Lim-Dûl's ring as a battle trophy. This ring would over the course of the next decade make her a slave to the will of Mairsil.

During the next twenty years, Jaya was a leader of a group of mages who tried to protect the city of Kelsinko from being flooded by the rising seas without success. 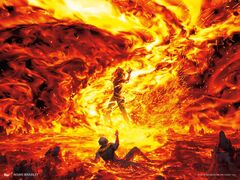 The moment when Jaya ignites her spark

Twenty years after the casting of World Spell, Jaya suddenly appeared in the School of the Unseen to see Jodah, who she had not seen since Lim-Dûl's assault. She brought Jodah an emaciated, blackened hand of Lim-Dûl with one of its fingers removed. The finger with the ruby ring - Mairsil's ring - was missing. Jodah and Jaya set out to search for the missing ring, fearing that Jodah's ancient enemy had returned.

Their journey leads them to Tresserhorn, Kjeld, Lovisa Coldeyes's Balduvian camp, and finally to Soldev. During the journey, Jodah realized that Jaya had somewhat changed since her younger years, and she often behaved strangely. When they reached Soldev and visited the vaults of the Adnates, the truth was revealed: in the aftermath of Lim-Dûl's battle against Kjeldor and Balduvia, Jaya found the finger and the ring and decided to bring them to Jodah, hoping that they would help him.

However, she donned the ruby ring, and Mairsil the Pretender's spirit infected her mind. She cut Jodah's throat, using his blood to revive the Phyrexian war beasts. Jodah miraculously saved himself from certain death with the help of his mirror. He then battled the possessed Jaya in the debris of ruined Soldev. He managed to shatter his mirror directly into her face, triggering the "reward" from Freyalise. In the blazing inferno that followed this breakpoint Jaya's own planeswalker spark flared. With a thought, she erased Mairsil's tainted presence once and for all, then planeswalked to the School of the Unseen and destroyed the rampaging war beasts there. With Jodah's help, she cut and sealed the bottomless pit that Lim-Dûl relocated there from Tresserhorn with the agreement of Gerda Äagesdotter. Finally, she helped Gerda with finding a new location for the school.

As a parting gift, Jaya gave Jodah an amulet, allowing him to remain sane despite his age, and allowing him to live as long as he willed to. She then departed Dominaria for the wider multiverse.

Jodah later mentioned of Jaya Ballard implying that she died in the period between the end of Ice Age when she was seen for the last time, and the present, the cause being her recklessness and impetuousness, that "eventually cost her her life". It is neither known where and when this event happened, nor how Jodah knows about it. There is also some suspicion that the Jodah who said this came from an alternate reality, and thus was referring to "another" Jaya.[3] 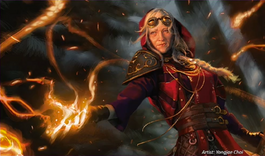 Jaya in her latter days

Sixty years after the mending, Jaya is still very much alive.[2] When Jace Beleren travelled to Dominaria to meet his friends of the Gatewatch, he found Gideon travelling on a skyship with the old pyromancer.[4] Chandra had found her on Regatha, where she had posed as the elder Mother Luti, the matriarch of Keral Keep.[5][6][7][8] After she helped defeat Belzenlok, Jaya agreed to help the Gatewatch in the fight against Nicol Bolas. She didn't take the oath, jokingly stating that she was "not a joiner".[9] 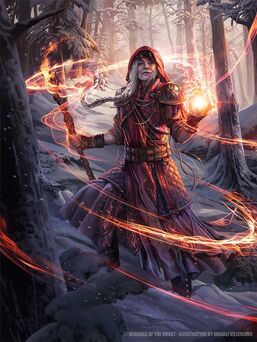 Jaya traveled with the Gatewatch to Ravnica for the final confrontation with Bolas, and immediately became trapped there due to Bolas's use of the Immortal Sun. Alongside many other planeswalkers and Ravnicans, she fought against the Eternals of Bolas' Dreadhorde.[10]

During the invasion, the trapped planeswalkers got together with Ravnican leaders to strategize. At Jace's recommendation, they decided to split up into teams to focus on specific tasks. Jace, Jaya, Teferi, and Vivien volunteered to assassinate Liliana. When they found her, Teferi warped time around her, slowing her ability to react, defend herself, or strike back at her attackers. This allowed Jaya and Vivien to badly wound her with fire, arrows, and animal spirits, although the Onakke spirits in Liliana's Chain Veil protected her. Nonetheless, they almost succeeded, but Bolas stepped in and saved Liliana by destroying the buildings they were standing on. Fortunately, Teferi saved himself and the other three planeswalkers by slowing their falls.

Jaya survived the battle and was present during the Planewide Celebration that followed. At the behest of Samut, she and Chandra cremated the bodies of the now-inactive Eternals.

To protect Chandra from more grief in a direct confrontation with her former friend Liliana, Jaya secretly tracked Liliana to Dominaria and agreed to escort Kaya, Teyo and Rat to the necromancer's exact location.[11]

Chandra Nalaar is known to have quoted Jaya before they actually met. Chandra learned at the Keral Keep monastery, a fire mage training academy that was originally founded around Jaya's teachings on the plane of Regatha. The academy values, above all other things, personal freedom and individual choice. In order to make sure that her message and portrayal would not be misinterpreted and distorted, Jaya kept a close eye on Keral Keep under the guise of Mother Luti.