From MTG Wiki
(Redirected from Jamuura)
Jump to: navigation, search 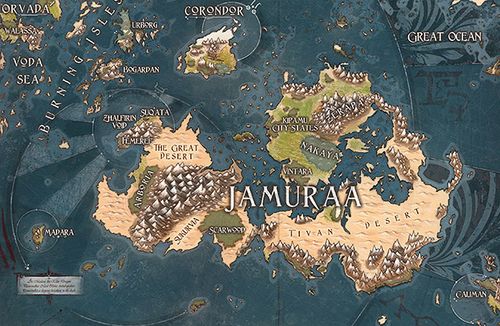 Jamuraa refers to a major supercontinent on Dominaria. It was the setting for the Mirage, Visions and Prophecy expansions.

Jamuraa is located about two thousand miles south of Corondor. Far to the northeast of it lies Shiv, and southeast lies Caliman. Jamuraa extends for several thousand miles. The north of its western subcontinent is occupied by three nations: the militaristic Kingdom of Zhalfir (now phased out of existence), the religious state of Femeref, and the trading province of the Suq'Ata Empire. South-east lies the Great Desert, which is controlled by the Suq'Ata Empire and the bipedal lizards known as the Viashino. The southern part of the subcontinent is occupied by the Blue Mountains, the forested regions of Arboria and Scarwood and the Sukurvian Desert, where lie the city states of Bryce, Tirras and Palmyra.

This region remained relatively stable for millennia, being untouched by the Brothers' War, discovering the use of magic very early (possibly before any other region) and using it to keep the Ice Age from affecting it.

Johan, Tyrant of Tirras and Emperor of the Northern Realms, was a powerful but evil mage who tried to conquer the Jamuraan western continent. He entered in direct conflict with the city-states of Jamuraa, led by Hazezon Tamar and the Robaran Mercenaries. After a first defeat against the city-states, his second large scale attempt consisted of trying to conquer the Sukurvian Desert in order to enslave the cat warrior tribes living there, wich would lead them to ally with the humans to ultimately defeat Johan.

After he settled on Jamuraa, the wizard Mangara created a peace agreement between the rivalling nations. When Femeref and Zhalfir could not agree on a border, Mangara created a buffer zone near the Unyaro Jungle. To police this zone, he summoned a large contingent of Quirion elves. The creating of peace with Suq'Ata was trickier but resulted eventually in a trade agreement. Within a century Mangara's Harmony created a new age of enlightenment.

Zhalfir, Femeref and Suq-Ata united against Kaervek after the vanishing of Mangara. During the Mirage Wars the country was plundered by Kaervek's troops, and plagued by the Nightstalkers of Urborg.

Later Jamuraa was subject to a Keldon invasion right before the Phyrexian Invasion. After the later war, the planeswalker Teferi decided to save the region further strife, and phased out the subcontinent. In Future Sight when Shiv and Zhalfir needed to be phased back in, there were complications with the time rifts, and as a result, Jeska Planeswalker sealed the rift before Zhalfir could be phased back in, thereby effectively erasing the country from existence. Much of the Suq'Ata empire couldn't be saved either.

The western subcontinent is linked to the south-eastern continent by the Onyx Bridge, an ishtmus barely ten leagues wide that divides the Jumuraan Sea in the north from the Bite of Ishiaan to the south.

The Jamuraan Sea, also known as the Midmercian Sea is surrounded by the three Jamuraan subcontinents.[2] There are many islands within this sea, though none have been named.[3]

Jamuraa has produced some interesting characters.