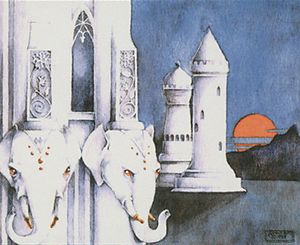 One of the Ivory Towers of Terisia City. Art by Margaret Organ-Keen.

A woman known as the archmandrite presided over the order and dwelled in the highest tower. Hurkyl, Drafna, and Feldon attended meetings with the archmandrite of the Order in order to establish the Third Path, also known as the "Union". They had hoped to create an alliance of magic-users, historians, intellectuals, and artificers from across the continent that sought neutrality in the war between Urza and Mishra. Members of this Union were the first to delve into the arcane and rigorously study it, perhaps in all of Terisiare's history. Because of its friendly atmosphere, peoples of all cultures flocked to Terisia City to join the teams of mages and scholars, and seek shelter from the chaos elsewhere.

It is possible that Terisia City would have repelled the Fallaji during the War, except for the Brotherhood of Gix who had been welcomed into the Order of the Ivory Towers. They finally betrayed the city, and opened the gates to the onslaught.