For other uses, see Invasion (disambiguation).

Invasion is the twenty-first Magic expansion and was released in October 2000 as the first set in the Invasion block.[3][4]

Invasion contains 350 black-bordered cards (110 rare, 110 uncommon, 110 common, and 20 basic lands). Invasion's expansion symbol is the symbol of the coalition, a cooperative effort of Dominarian forces from all five colors banded together to oppose Yawgmoth and the Phyrexians.[5] The designers used parts of the unpublished Spectral Chaos set, that was designed by Barry Reich. The set introduced split cards and saw the return of multicolored "gold" cards, absent since the Stronghold expansion. In fact, its major themes revolved around multicolor decks and strategies. The popularity and appeal of gold cards along with high but balanced power level culminated into making Invasion one of the most popular Magic sets in the game's history. The set featured some legendary cards of the Weatherlight's crew: Captain Sisay and Hanna, Ship's Navigator. It also introduced the kavu. The set was accompanied by the novel of the same name.

In keeping with the focus on multicolored cards, Invasion also introduced the gradient dual-colored land text boxes for lands producing mana of two different colors, such as Coastal Tower and Elfhame Palace, which would be used in all subsequent expansions and editions of Magic.

As the hordes of Phyrexia begin pouring into Dominaria,[6][7] the world looks to Urza, planeswalker and master artificer, for defense against the onslaught. As entire cultures fall under the Phyrexian hell, Urza gathers heroes, renegades,[8] common folk, and powerful artifacts to fight the invasion.

Invasion was sold in 75-card tournament decks, 15-card boosters, four preconstructed theme decks and a fat pack. The booster packs featured artwork from Captain Sisay, Dromar, the Banisher and Kavu Titan. At Invasion prerelease events on September 23, 2000, a foil Kavu Furens was handed out as a novelty. This was a Raging Kavu printed with Latin text. The set was accompanied by the novel of the same name.

The following creature types are introduced in this expansion: Kavu, Plant. 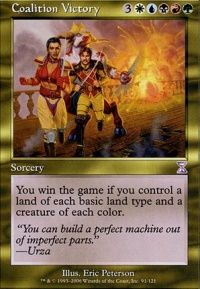 Coalition Victory from Invasion is an example of an alternate-win card.

The following 20 cards have been reprinted from previous sets and included in Invasion.