Iconic Masters is a booster-based compilation set[3] that was released on November 17, 2017. It is designed to be drafted.[4] 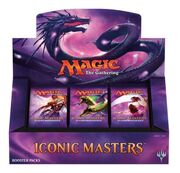 Iconic Masters contains 249 cards (101 commons, 80 uncommons, 53 rares, 15 mythic rares) and includes randomly inserted premium versions of all cards. The name of the set was inadvertently revealed in a WPN-mail send to retailers in April 2017.[5] Iconic Masters offers players a tour through some of the most powerful cards in over 23 years of Magic history.[6] Featuring new artwork on many cards, the set brings an array of massive Angels, Sphinxes, Demons, Dragons and Hydras alongside some favorite and most memorable spells.

Iconic Masters was designed to provide an exciting and unique Limited experience with cards that had never been drafted together. Unlike Modern Masters or Eternal Masters, this product is not geared to any specific format. Mark Rosewater considers the name of the set misleading, because some really iconic cards are missing.[7][8][9] The release was met with disappointed reactions.[10]

Remarkably, Iconic Masters was the second Masters series-set to be released in 2017. Its release was connected to the celebration of Magic's 25th Anniversary. The cards of the set were revealed at the HASCON prerelease on September 8–10, 2017. There were no previews. Like for other Masters series sets, the MSRP of one booster was set to $9.99.[11] Every booster box of Iconic Masters contains 24 booster packs — each with fifteen randomly inserted game cards, including one premium card in every pack. The 16-card boosters (the sixteenth card is a marketing card) feature artwork from Elesh Norn, Grand Cenobite, Heroes' Bane and Firemane Angel.

Iconic Masters released on Magic Online on November 17, 2017, the same day as the paper set.