Ice Age is the first set in the Ice Age block. It is the 6th Magic expansion and was released in early June, 1995. 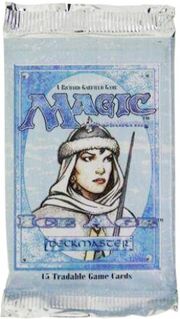 Ice Age contained 383 black-bordered cards (121 rare, 121 uncommon, 121 common, and 20 basic lands). It is notable for being the first standalone Magic expansion set; it could be played independently of other Magic products. Because of this, it was the first expansion to reprint all five basic lands, staple cards like Swords to Plowshares and Giant Growth and popular older cards. All in all the set included about 8% reprints of old cards and another 8% of the cards were functional reprints. Ice Age is the first expansion to use the new white mana symbol (

Even though Alpha was released with the name "Magic: The Gathering" it wasn't originally Richard Garfield's intent that this would always be the name. His original idea was that the game would keep reinventing itself and when Ice Age came out, it would be named as "Magic: Ice Age".[6] The plan was scrapped for legal reasons and recognizability.[7]

Unlike earlier sets, Ice Age didn't have a fixed printrun, but was only available in a certain time period. It was released in early June 1995 and went out of print in February 1996, although it did not really dwindle in availability until the end of 1996. The print run is estimated at 500 million cards. The cards were sold in 60-card starter decks and 15-card boosters. Ice Age was the last set to have 10 starter decks in a box. It was the first expansion to have boosters with foil wrappers and artwork (Jester's Cap, Dire Wolves, Scaled Wurm, Pygmy Allosaurus, Karplusan Yeti).[8]

Ice Age was the first Magic expansion that was released in French, German, Portuguese, and Spanish. It was also the first set to have a prerelease tournament (Toronto, June 2–4, 1995).

The Ice Age storyline, like the earlier sets that took place on Dominaria, occurred on the continent of Terisiare, where the Brothers' War had taken place. That war ended with the Sylex Blast, which was powerful enough to alter the planet's climate, the slow creep of glaciers, the mighty gales of blizzards and the numbing cold of lumpy winters have all combined to make Dominaria a dark and frigid world.[9] All the major civilizations of Terisiare had been destroyed by either the war or the ice. New cultures arose on the ice, fighting bitterly for survival, but when the necromancer Lim-Dûl unleashed a horde of undead, old enemies were forced to work together or be overwhelmed.

The setting was based largely off of Norse style mythology and culture. Names were largely Scandinavian in character, and occasional runes [10] and Norse-style clothing and armor can be seen in the art. 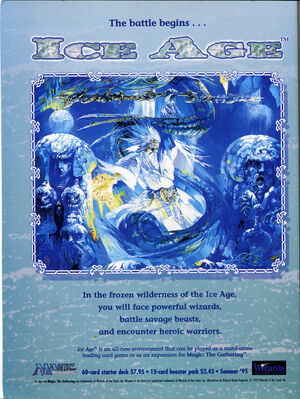 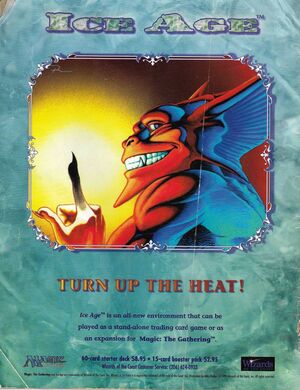 The "East Coast playtesters", consisting of Skaff Elias, Jim Lin, and Dave Pettey, that had helped Richard Garfield with the original Alpha set of Magic decided that they could create a "more interesting" set. They were quickly asked by Richard Garfield to create a Magic expansion, and Chris Page was assigned to join the team.[11] At the time designers were given the freedom to either compose their sets entirely out of new cards or to use the commons from Alpha Edition and create only new uncommons and rares. The Ice Age group, who saw themselves as improving on Alpha Edition, chose to reuse many staple cards. The design goals are best described by Skaff Elias himself: "We wanted a set where flying was special, not just an extra word tacked on to every played creature. We wanted a set where the idea that a color was short on creatures meant something. We wanted a set where the 'allied' colors were played more often with each other than enemy colors were. We wanted strategy in simple creature combat as well as flashy enchantments that gave you cards for life. We wanted games to last longer (when we started the design of the set, the Magic environment was too fast due to unlimited card restrictions) and have more turnabouts." After Alpha Edition was published it was quickly realized that the players were ravenous for new cards and would not, at the time, stomach reprints of commons they had already seen. The presence of the reprinted commons would lead to the delayed release, and the redesign, of Ice Age. This was both good and bad for the set. More cards were created, some of which were slated to replace reprints, and more time was available to test those cards. Unfortunately, last-minute untested additions to improve the strength of the expansion's themes added complications to the cards and seemed clunky. Snow-covered lands were added late to improve the environmental theme, which could explain why the snow-covered mechanic was so poorly developed.

While the common reprints delayed the release of Ice Age, the timing for a standalone expansion was probably fortuitous, as it took time for Wizards of the Coast to collect and analyze feedback from the players and develop a plan for the long-term survival of the game. The idea of regularly recreating Magic is fundamental to the survival of the game, for which the Ice Age development team had to argue. The standalone style of this expansion was hotly debated at the time, but in the end proved to be a solid idea and important to the game and proved that players would eventually accept some reprints in an evolving game.

Ice Age introduced cumulative upkeep and snow lands (then called snow-covered lands) to the game. Cumulative upkeep is a cost on permanents that increases with each turn, and was used entirely as a disadvantage on cards with powerful and/or game-changing effects in this expansion. Snow-covered lands are a cycle of basic lands that also have the Snow supertype, which is meaningless by itself, but is referenced by other cards. This feature in the set is not very well developed and considered mostly a failure by the developers of the Alliances expansion, who chose not to expand much on this theme. Snow-covered lands inspired the creation of the Arcane spell type in the Kamigawa block.

Another popular mechanic introduced in Ice Age, but did not use a keyword: cantrips. These are spells that, in addition to a normal small effect, also replaced itself with a card draw. The typical formula for the mana cost of a cantrip was to add 2 to the cost of the effect, which was typically one colored mana for the typically small effect. Additionally, Ice Age set the precedent of such spells drawing a card during the next upkeep. This was done instead of today's simpler "Draw a card" because the developers were not sure if adding card drawing to simple spells would make them overpowered, and they chose to print a more conservative version of the ability. Delayed card drawing would continue on cantrips through the Visions expansion, when the delay was removed for being unnecessary.

Ice Age also further explored legendary permanents, expanding on them from the lands and multicolored creatures in the Legends expansion to now include mono-colored creatures.

Ice Age also had a theme of allied color cooperation, with cards of one color that required or were improved by the use of allied color mana. For example, Freyalise Supplicant is a green creature that requires you to sacrifice a white or red creature, and Word of Undoing is a blue instant that returns a creature to owner's hand, as well as any white Auras you own on that creature.

Ice Age was designed thematically for slow play, with very few creatures with evasion abilities. As a result, Ice Age limited play is often characterized by long games with non-flying creature stalls, as Magic sets were not yet designed specifically to support limited play.

Ice Age featured the return of various familiar creature types and also introduced numerous novel ones, some subtypes of which were exclusive to, and even shared the name of, the creature cards on which they were printed. This was not, by the standard practices of the time, unusual, as the design and development of Ice Age was prior to Magic: The Gathering's release to the general public. Since then, several of these unique creature types have been supplanted with other, more-appropriate or more-established creature types or been entirely removed in successive iterations of errata and the Grand Creature Type Update.[12][13] Not unusual for those times, creature types — namely Barbarian, Bear, Fox, Dryad, Goblins, Insect, Knight, Mammoth (now Elephant), Mercenary, Orc, Soldier, Zombies, Wolf, Worm — were printed with the plural number (or, informally, "form").

The following creature types were introduced in Ice Age:

Ice Age is the first expansion to include true reprints. These cards were considered to be the defining cards of their colors, and all of them came from the Core Set.