Huatli is a Human planeswalker and warrior-poet from Ixalan who rides a dinosaur.[2]

Huatli is a short, powerfully muscled woman with warm brown skin, searching eyes, and a grim mouth. She is mostly armored and armed, with a long tightly braided black ponytail emerging from beneath her helm.[3] She has a special connection to her dinosaurs, being able to communicate with them via scent-memories. She is a poet and a singer. When she sings, her voice is a clear, soothing, and warm alto.[4]

Huatli is primarily green-aligned, but now secondary in white mana, having lost red after realizing her nations' xenophobic ways.[1]

One of the youngest candidates for the title of warrior-poet in generations, Huatli fought against the vampire incursions on the Sun Coast and was honored by the Emperor for her deeds. During her defense of the coastline, she was met by the crew of an unknown creature. The entity called itself Angrath and told her that it searched for the Immortal Sun. In their battle, her spark ignited and she found herself in a wondrous place she had never seen before, only to be ripped back to Ixalan. Angrath recognized her as a fellow planeswalker and offered her assistance in leaving the plane in exchange for help, but she attacked him and fled. Believing the vision to be Orazca, Huatli was proclaimed warrior-poet of the Empire and tasked by the Emperor to reclaim the Golden City for the Sun Empire.[5] Like other planeswalkers, she was unable to leave Ixalan. She described this as a 'golden gale' that prevented her from 'flying away'.[6] 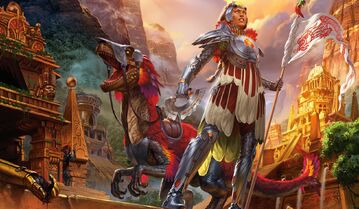 Huatli temporarily joined up with the merfolk Tishana, to prevent Kumena from gaining control over the Immortal Sun.[7] In the race for Orazca, Angrath caught up with her again.[8] In an uneasy truce, they traveled together to the golden city. On their way, Angrath rudely questioned Huatli's meager ambition to officially earn the title of Warrior-Poet, showing her the possibilities of a planeswalker. After stopping at a tomb in the jungle, and wakening Saint Elenda, Angrath left her.[9] Huatli reacted by sending a Dinosaur to trample him in the mud.[10]

Rejoining Tishana in battling the vampires Vona and Mavren Fein, they were interrupted by the Siren pirate Malcom, who drew them out of the room they were fighting in. The song ended and Breeches (a goblin pirate) started slashing at Vona's face and eyes. Then, Angrath interrupted them all by barreling through the room they were just in. He had killed the dinosaur that Huatli had used to push him into the dirt. He swung his chains at Breeches, who was pulled towards Angrath. Then, everyone scrambled to touch the Immortal Sun. Tishana put her hand on it, Huatli put her foot on its side, Angrath stomped on the object's center, while Vona, who had just been touching it, put both hands on it once again. A current of energy rushed through them all and Huatli laughed at how good it felt.[10]

The feeling was taken away right after, when Tezzeret stole the Immortal Sun through a planar portal. Now able to planeswalk, Huatli first returned home, using the Elder Dinosaur Zacama as a mount with the remaining power of the sun inside her to demonstrate her success. The emperor finally allowed her to use the title "Warrior-Poet", but his terms were such that she no longer wanted to serve him. After seeking her family's permission, she planeswalked away.[11]

When she arrived in Ghirapur, she was at first overwhelmed by the new experience. Being greeted by Saheeli, the two women shared their experiences, with Saheeli being eager to model an artificial dinosaur after hearing about them from Huatli for the first time.[12] 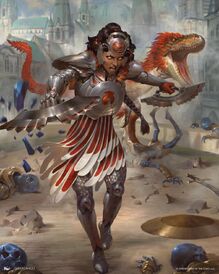 Huatli and Saheeli were lured to Ravnica by the Interplanar Beacon, and immediately became trapped there due to Bolas's use of the Immortal Sun. Alongside many other planeswalkers and Ravnicans, she fought against the Eternals of Bolas' Dreadhorde.[13]

During the invasion, the trapped planeswalkers got together with Ravnican leaders to strategize. Huatli encountered Angrath at the meeting and mocked him for getting trapped by the Immortal Sun again.

At Jace's recommendation, they decided to split up into teams to focus on specific tasks. Gideon, Aurelia, Angrath, and Huatli led a massive force of planeswalkers and Boros, Izzet, and Simic troops into battle against the God-Eternal Rhonas, who was leading a battalion of Eternals to destroy the gathered opposition. Gideon and Aurelia led the aerial units, while Angrath led the ground units. Huatli was suspicious of Angrath, keeping an eye on him to make sure he didn't betray the others, yet she also went out of her way to protect him.

After Gideon killed Rhonas, Huatli joined up with Ajani, Jiang Yanggu, and Mu Yanling, who had volunteered to help protect and rescue civilians. With the help of Vraska and the Golgari Swarm, they were able to evacuate many civilians to the tunnels beneath the city, where they would be safe from the Dreadhorde.

She was one of the few planeswalkers who chose to remain on Ravnica after Chandra disabled the Immortal Sun, helping the Gatewatch in their fight against Bolas. Afterward, she joined the group of planeswalkers that visited Theros to pay respect to Gideon. There, she sang a poem for him.[4]