Horror is a catch-all creature type used for horrible, black-aligned fiends and beings that defy normal descriptions. Horrors originate from different sources such as nightmares, scientific experimentations and hellish planes.[1] The first creature to bear the type was Cosmic Horror in Legends. Many cards received the Horror type retroactively in the Grand Creature Type Update. Notable creatures from early sets, like Abomination and Hell's Caretaker retroactively became Horrors.

Horrors don't have a prevalent ability, but most of their abilities do some sort of harm to the controller of the Horror. Many of them also have some kind of evasion.

Between 1995 and the fall of 2002, Horrors replaced Demons as the black iconic creature.[2]

The Desert Lands of Amonkhet are not only inhabited by undead abominations, but also horrors who prey on those that dare live outside the Hekma. Some of the creatures rival even the gods in size.

Several of these, like the Grim Strider and the Scrounger of Souls, have elongated forelimbs and a mask-like bone plate instead of a face with a glowing rhombus of light modeled after an eye in its center. Other Horrors are spawned from enchantments or are warped inhabitants of the plane, like the Wasp of the Bitter End. 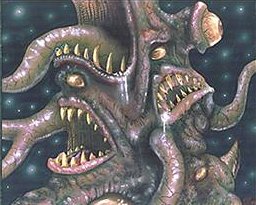 Indescribable creatures of nightmare lurk in the ruins and dark places of Ixalan.[3] Many are thought to be the corrupted remnants of the life energy and brilliant light left behind in places the Sun Empire has abandoned. Such creatures include a monster that lurks in the darkness of the jungle and feeds on the blood of mammals and dinosaurs, called the chupacabra. It is stealthy and elusive, known more by the blood-drained prey it leaves behind than by actual physical sightings (Lurking Chupacabra, Ravenous Chupacabra).

Ravnica has several kinds of horrors, most creations of one of the more unsavory guilds. The Dimir employ Horrors like the Abyssal Nocturnus, the Dinrova Horror, the Consuming Aberration and Horror of the Dim, who are created from a combination of necromancy and mind magic with the intend to guard their secrets. The Orzhov use Horrors to collect their debts from the unguilded by sending them into their quarters to collect their souls (Slum Reaper). The Rakdos cryptwitches employ their own brand of Horror, like the Cryptborn Horror, who are the results of their experiments, sometimes wrung from the collective nightmares and phobias of the inhabitants of the city (Dread Slag). And finally, the Golgari have command over Horrors wrought from plant matter and mutated insects that are able to spread on their own by infecting their surroundings with their essence (Woodwraith Corrupter). Sometimes horrors are hunted by the centaurs of the Selesnya Conclave (Hunted Horror).

Horrors are also created by: