For the comic, see Homelands (comic).

Homelands, released in October 1995, is the seventh Magic expansion. It was the second expansion of Ice Age block until July 2006, when it was replaced by Coldsnap in this role. Homelands is frequently panned as Magic's all-time low in game design, though it has also been praised for the quality of its setting and flavor. 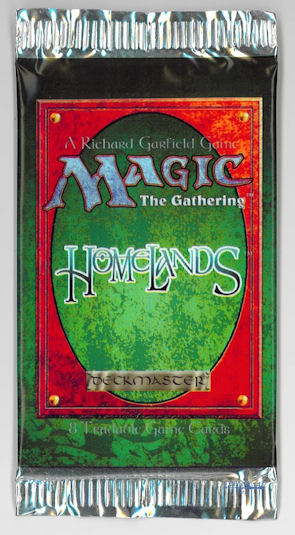 Homelands was developed as a separate expansion from the current Ice Age block at the time.[2] The set introduced no new mechanics or keywords, but used some of the mechanics of Ice Age, most notably the cantrip ability and single-color legendary creatures. Each color had at least one legend, with some colors having as many as five. The absence of mechanics found throughout the Ice Age block, such as Snow lands and cumulative upkeep and the fact that it didn't follow the Ice Age block storyline made it a poor fit in its former block. The expansion symbol of the set is a simplified globe of Ulgrotha, the plane where Homelands was set.[3]

Homelands was probably the last set printed by Cartamundi in Belgium, because it was the last set to be printed on the 121-card print sheets that were used by that firm. However, Cartamundi would later restart printing Magic cards again.[4]

The Homelands lands have a unique teal colored text box. 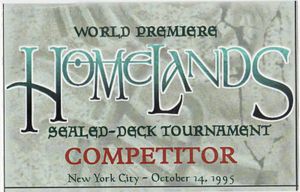 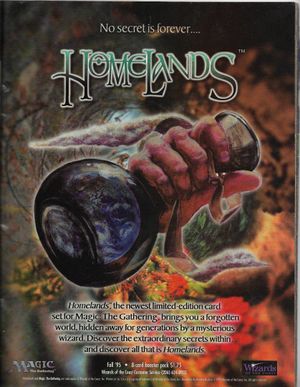 Homelands is the last expansion to be printed on only two sheets and sold in eight-card booster packs (two cards from the uncommon sheet and six cards from the common sheet). Each booster bears the same green background image. Homelands was the first simultaneous international release. German, Spanish, French, Portuguese and Italian versions were being launched around the same time as the English version, and there were release events, called Magic: The Gathering I in New York City, at the Internationale Spieltage SPIEL in Essen, Germany, the Lucca Comics convention in Lucca, Italy, and other locations.

The planeswalker Feroz came across Ulgrotha, the once-beautiful plane now destroyed by the Wizards' Wars. At the last unspoilt oasis on this plane he met fellow planeswalker Serra, whom he married. Together they worked to restore the plane, and to protect it, Feroz's Ban was created. Later, Feroz died during a lab accident, and the grief-stricken Serra abandoned the plane. In her absence the isolated civilizations of the plane fight amongst each other while the vampire Baron Sengir plots to take control of the plane under the fading Ban of Feroz.

Homelands explored popular characters including Sengir and Serra and had a strong flavor, meaning that the cards were designed to fill specific roles. The flavor text on the cards can also be used to piece together parts of a story. 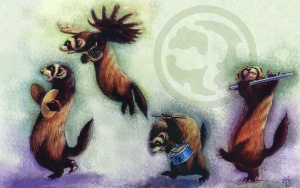 Ferrets of Ulgrotha, as depicted by Heather Hudson in the Duelist #7.

Homelands, like many early expansions, has many creature types that are unique to the creatures they are found on. Many of these are real-world animals and types of people, grounding this expansion more in the real world than other expansions.

Homelands, on average, had an unexpectedly low power level compared to previously released expansions. The expansion was created, as many of the earlier sets were, without much communication between designers of various sets. It was made with a flavor-first design philosophy, which, along with its separate story line, resulted in its strong difference from the Ice Age and Alliances expansions to which it was related in time. This flavor-first design also led to oddities in abilities. For example, many abilities were found in colors that normally do not receive them, such as flying in green or vigilance and trample in black, although this philosophy was not as developed in 1995 as it is today. Mark Rosewater wrote that "Homelands was a poorly designed set".[5] R&D at the time (Richard Garfield and the East Coast Playtesters) didn't want to print the set, but Peter Adkison overruled them because he wanted to keep his promise to the two designers. As a result, the developers didn't put much work in it.[6]

Homelands has one cycle and one partial cycle: