Hollowhenge a.k.a. the Lost Capital is a ruin of wood and brick, standing where Kessig's county seat Avabruck once stood.

Only a couple of years ago it was a thriving small town of manor houses. When the protective power of Avacynian magic began to wane, the wards around Avabruck's central cathedral, the Temple of Saint Raban, failed. It took only two nights for the werewolves to discover this breach in protection.

The howlpack known as Mondronen ripped through the town, slaughtering any in their path, charging straight for the Temple. There they took up siege, tearing down the cathedral and feasting on those who attempted to attack them. City magistrates gave the order to evacuate, but communications became chaotic, and many residents opted to ensconce themselves in their homes.

Seven days into the Mondronen occupation, the werewolf savages enacted some unknown type of blood ritual. A mystical, concussive force leveled the city from the center out, flattening most of the structures in town and killing hundreds. Only the outermost ring of Avabruck's buildings remained, forming a circular "henge" around the devastation within. Rescue attempts met with further werewolf attacks. 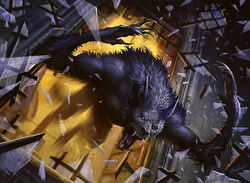 As time went on, the city was abandoned, even by the howlpack. Now only wild, terrified ghosts and the occasional werewolf scavenger scuffle among the ruins. It's said that all who were killed in the cathedral-shattering blast still linger inside the walls of Hollowhenge, trying in vain to reconstruct their homes or recover their lost loved ones. Some spirits are deeply angry and ferocious wights, dangerous to all who seek within. Despite the danger, travelers often pass near to Hollowhenge, as the former county seat lies at the crossroads of two major Kessig thoroughfares.