The Hero's Path was a player event that spanned the complete Theros block.[1][2] It captured the unique feel of the mythological hero and paralleled Elspeth's quest in the block's storyline. Players participated in the Hero's Path quests during prerelease events, FNM release events, and Game Days. In each of the nine quests of the Hero's Path, players could win a unique hero card. By collecting them, players grew in power and became ever-increasingly more prepared for the epic conflicts at the end of each arc.

In the first quest (Theros prelease), players chose their color and received a prerelease pack (or hero pack) of that color: Path of Honor

. Each prerelease pack contained one hero card (The Protector, The Philosopher, The Avenger, The Warrior, and The Hunter, respectively), which weren't for use at the prerelease. The pack also contained a playable exclusive promo.

Gift from the Gods[edit | edit source]

During the Theros release weekend FNM, players solved a visual puzzle at their game store to receive a second hero card (The Harvester). By connecting the stars in the starfield the combination 5/7 appeared, which represented the power and toughness of Erebos, God of the Dead. 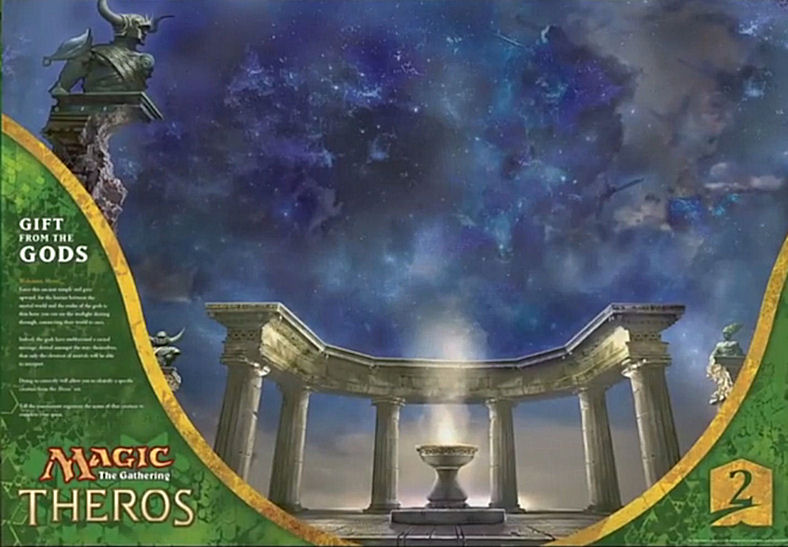 During Theros Game Day, players pitted their deck against the special Challenge Deck Face the Hydra, where they could use their hero cards. By winning against the challenge deck, players received a third hero card (The Slayer). 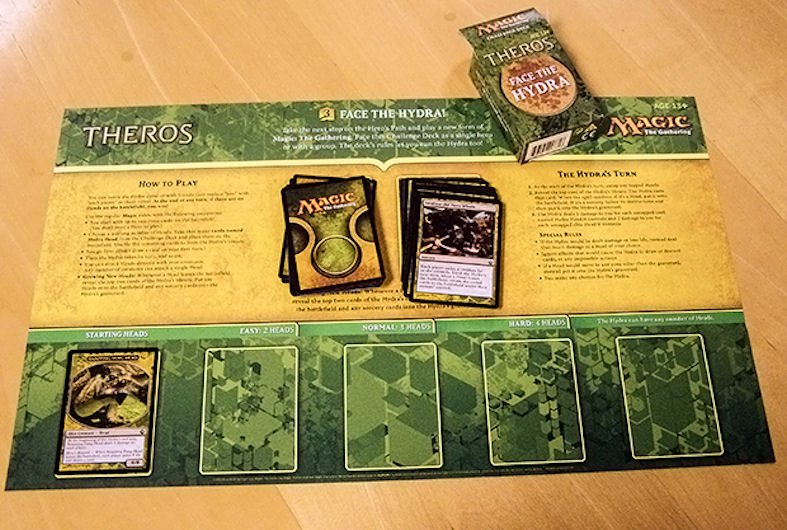 The fourth quest on the Hero's Path took place during the Born of the Gods prerelease on February 1–2, 2014. The players pick their color, and receive a prerelease pack (or hero pack) of that color: Destined to Lead

. Each prerelease pack contains one Hero card (The General, The Savant, The Tyrant, The Warmonger, and The Provider, respectively) and a playable exclusive promo.

Venture into the Wilds[edit | edit source]

The fifth quest took place during the Born of the Gods release weekend FNM on February 7–9, 2014. The "Venture into the Wilds" puzzle poster contains clues that hint at one of the new cards featured in the set. Players who solved the puzzle received a fifth hero card (The Explorer).

The sixth challenge was to Battle the Horde on March 1–2, 2014 during the Born of the Gods Game Day.[3] By winning against the Challenge Deck, players received a sixth hero card (The Vanquisher).

The seventh quest on the Hero's Path took place place at the Journey into Nyx prerelease, April 26–27, 2014.[4] Players chose their color and received a prerelease pack (or hero pack) of that color: Forged in Glory

. Each prerelease pack contained a hero Equipment card (Spear of the General, Cloak of the Philosopher, Lash of the Tyrant, Axe of the Warmonger, or Bow of the Hunter, respectively) and a playable exclusive promo. During the prerelease, players had the opportunity to win three mystical components, represented by reward stickers. Three component stickers combined in specific ways to create one of seven different enhancements. The activity card would be handed in to the tournament organizer to receive the corresponding "enhancement sticker". That sticker was then placed onto the player's hero card in the blank space as a new permanent ability, thus forging one the most powerful weapons on Theros: a customized Godslayer. 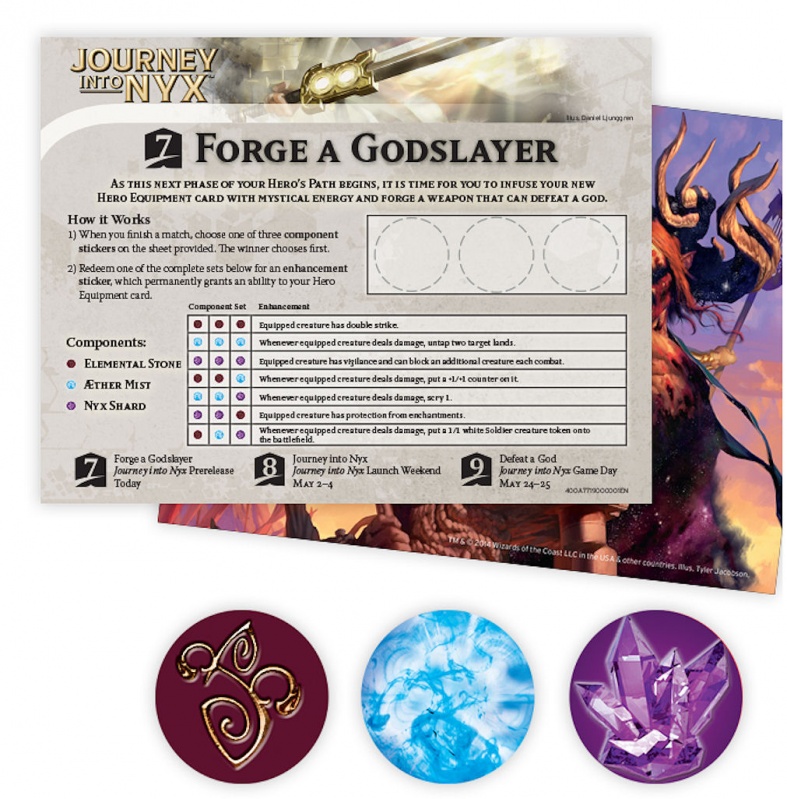 The eighth quest took place during the Journey into Nyx release weekend FNM on May 2–4, 2014. The Journey into Nyx puzzle poster contains clues that hint at one of the new cards featured in the set. Players who solved the puzzle received an eighth hero card (The Destined).

The final challenge was to Defeat a God on May 24–25, 2014 during the Journey into Nyx Game Day.[5] Players were able to use three of the hero cards they have collected and the Godslayer that they forged at the prerelease to complete the final quest of the Hero's Path. By winning against the Challenge Deck, players received a ninth hero card (The Champion).