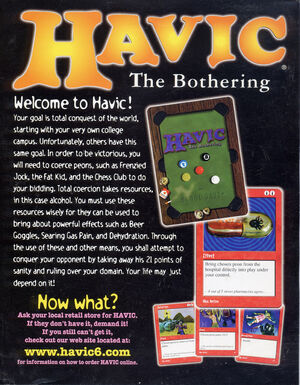 A full page flyer for Havic given out at various game stores.

Havic: The Bothering is an unofficial parody card set created by PGI Limited in 1998. Havic was mentioned in InQuest #38.

The setting of the game is a modern day college campus, and the characters and cards represent party-goers. The game plays much like Magic: The Gathering, but uses only two resources - beer and cigarettes. The card artwork is simple and cartoonish, but are laid out in the same way as Magic cards.

PGI Limited, maker of Havic, was banned from attending GenCon in July 1998, when the major event sponsor - Wizards of the Coast - expressed concern over the parody's presence. Peter Gray of PGI Limited said in an open letter:

The rules were printed on the front and back of a single card inserted into the starters.

Being an obvious parody of Magic, the rules are very similar. By using the beer and cigarette resources, players recruit peons, create effects, and use items to reduce the "sanity" points of the opponent from 21 to zero. Some game terms were changed to be different from Magic. For example, tapped cards were called "whacked" and could later be "unwhacked"

The first release of the game, known as Skool Daze, was available only in 60 card starter decks; there were no boosters. Ten starters were packaged in each simple shrink-wrapped box.

A planned second set called Spring Break was announced but never released. That set would have been sold as boosters.

Vegan (card #98) appears on many card lists of the set, but was not inserted into packs as normal. It is unknown if the card was ever even printed. Peter Gray, and all three key artists (Sist-Airs, Norton, and Vinyl Vineshtein) have been unable to confirm its existence.

According to InQuest staff, PGI approached the magazine to provide it as a free insert. Because of the questionable legal status of the card game due to possible patent or trademark infringement, InQuest did not pursue this.