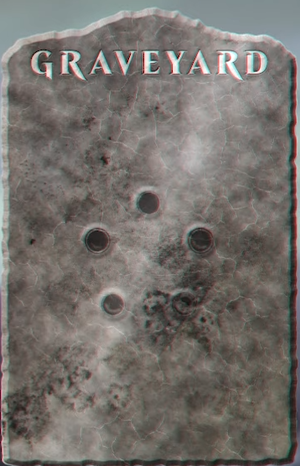 The graveyard is one of the six main zones in the game of Magic: The Gathering.

The graveyard is the pile into which you discard, where instant and sorcery spells go once they have resolved, and where permanents go when they have been sacrificed, destroyed, or "put into the graveyard" due to a state-based effect.[1][2][3]

Flavory speaking, sometimes the graveyard is regarded as a literal cemetery littered with bodies. In other ways, is regarded as a more conceptual past, a "place" where forgotten magics are hidden.[4][5]

Weatherlight was the first set where the graveyard "mattered". Blocks like Odyssey, Innistrad and Amonkhet gave graveyard strategies the center stage, and the graveyard played a huge part for the Golgari, Grixis, and Sultai in otherwise not-graveyard-focused sets.[6]

From the glossary of the Comprehensive Rules (June 1, 2020—Ikoria: Lair of Behemoths)

From the Comprehensive Rules (June 1, 2020—Ikoria: Lair of Behemoths)

Order of cards in the graveyard[edit | edit source]

Twenty-one cards from Magic's early sets relied on the order of cards in a graveyard. The last of these, Volrath's Shapeshifter, was printed in Stronghold.[7]

Bringing back from the graveyard[edit | edit source]

White, the color of mercy, is the color that saves things the turn they are destroyed.[8]

Exiling from the graveyard[edit | edit source]

Exiling from the graveyard is used to get rid of cards that might have an effect/usable activation cost.[8] Black does it most often, but white occasionally does it in sets that need it. Green has the occasional cards, such as Night Soil and Scavenging Ooze, though many cards with green also have black, such as Necrogenesis.