From MTG Wiki
(Redirected from Grandchild)
Jump to: navigation, search
Unsanctioned
Half decks

Unsanctioned is a silver-bordered box set, marketed as a ready-to-play "Un-set" experience was released on February 28, 2020.[note 1] The set combines reprints from previous Un-sets with sixteen new Un-cards.[5][6] It has a “wrestling match kind of flavor.”[7][8]

The set consists of five 30-card, preconstructed mono-colored decks, each designed to synergize with one another in unique and surprising ways. Each player combines two decks into one 60-card deck and faces off against another combined deck for some wacky gameplay that stretches the limits of what Magic cards can do.[9] The new cards (3 in each deck, and 1 appearing in all decks) were designed very much with Commander and Cube in mind.[10]

Like the other Un-sets before, Unsanctioned features five full-art basic lands.[11][12] You get two cycles of full-art basic land, one foil, one nonfoil.[13] There are also five regular basics, with each hiding a squirrel in its art.[14] All the reprints, save Blast from the Past and Old Fogey, feature new card frames, but some have nods to their old frame adjustments.[15] 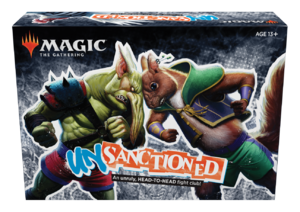 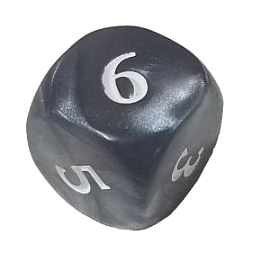 Unsanctioned features the return of Host and augment from Unstable on some new cards. Wordy also makes a return.

A new mechanic is Knightlifelink, a variation of lifelink (Damage dealt by Knights you control also causes you to gain that much life.).

Surgeon General Commander mentions the mechanic “mutate”, which Rosewater has said is a tease of the mechanic in Ikoria: Lair of Behemoths.[16]

Acorn counters, introduced on Acornelia, Fashionable Filcher, have their own symbol

and may be used as a resource. They are placed on players rather than on objects. Because of this, they are similar to energy counters.

Boomstacker is a dexterity card. 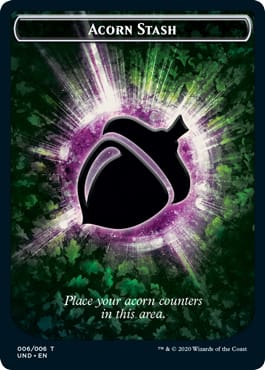