Gorgons, also known as medusae, are snake-skinned humanoid women with hair made of snakes or snakelike tendrils. Incredibly deadly, these creatures are rare across the various planes.

Gorgons have the ability to calcify organic entities that look at the gorgon's face. The transformation is rapid, leaving the victim as a stone statue, usually frozen in a position of abject fear or agony- a fine trophy for the gorgon's macabre collection. The gorgon must exert its will to effect this transformation, so the gaze of a surprised or friendly gorgon is harmless.[1] Only rare, powerful magic can reverse petrification (usually resulting in a well-preserved corpse), and it is irreversible if the victim statue is broken beyond repair.[2]

The first creature to bear the creature type was Masked Gorgon in Judgement, though the Infernal Medusa from Legends was later issued errata in the Grand Creature Type Update to become a Gorgon instead of a Medusa. Mechanically, Gorgons tend to either have deathtouch, or an ability that destroys creatures - of the eight without access to deathtouch, three have deathtouch variants, and three others destroy creatures in other ways. They also tend to have lower power and higher toughness.

A gorgon named Visara served as one of the Cabal's pit fighters on Otaria. Unlike other gorgons seen throughout Magic's history, Visara had large, plated wings which enabled her to fly. 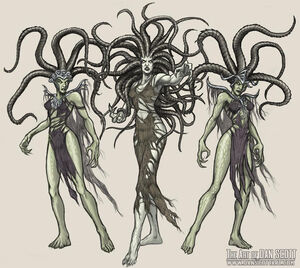 Ravnica is home to dozens of gorgons,[3] including the Sisters of Stone Death and the planeswalker Vraska. After several battles with the Golgari parun, Svogthir, the Sisters of Stone Death were diminished to only one: Ludmilla. She was believed to be the sole gorgon left on Ravnica, though Vraska and others later appeared as members of the Golgari Swarm as well. When Vraska took control of the guild, she became a passionate voice for other gorgons as they had become the most downtrodden race of the Golgari.[4]

Ravnican gorgons resemble green-scaled humanoids. In place of hair, they have a writhing mass of black, serpentine cables, and their hands are scaly claws.

Various gorgons are in the employ of Xathrid, a demonic creature worshiped by some cults of Shandalar.[5] This is represented by Xathrid Gorgon.

Gorgons of Theros were created by the god Pharika. Gorgons appear more common on this plane than on other planes, though they are still quite rare. Unlike the gorgons of previous planes, gorgons on Theros have snakelike lower bodies (similar to nagas).[6]

One of the most powerful gorgons of Theros is Hythonia, known as Hythonia the Cruel. Another gorgon was encountered by Dack Fayden when he entered her lair searching for a magical artifact.[7]

Some of Pharika's first creations, the Pharika's Spawn, were considered by her to be too dangerous for her to control. They were banished to the Underworld, and are now used by Erebos to keep souls where they belong.[8]