From MTG Wiki
(Redirected from Golgari)
Jump to: navigation, search

The Golgari Swarm is a black/green guild from the plane and city of Ravnica. Introduced in Ravnica: City of Guilds, the guild is also featured in Return to Ravnica, the Izzet vs. Golgari set[1] and in Guilds of Ravnica. 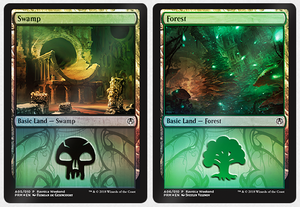 The Golgari Swarm is the embodiment of life and death.[2][3] The teeming masses of the Swarm believe that life and death are both natural [4] and equally essential too.[2] To them, life and death are natural elements of a cycle with no intermediary break.[5][6][7] Growth is power that comes slowly, but it is also ruthless and inevitable, and this makes growth a key virtue of the Swarm's power.[5][8] [9] Their necromantic magic has made the Golgari the largest Ravnican guild.[10][11] Much like a swarm of insects, the Golgari often seem to behave more like a single organism than as a group of individuals. The whole Swarm is driven by a primal instinct to survive and reproduce.

The Golgari Swarm's consists of many sub-factions, each with its own agenda. Their revered parun is the legendary necromancer Svogthir, the "god-zombie".[12]

Up until the Decamillennial, the Teratogens were the ruling class of the Golgari. It consisted mostly of non-humanoids such as plants, mutants, harpies, nagas, griffins, and centaurs. Nowadays they are of no importance anymore.

The Devkarin are a brooding, winsome, and often ambitious race of elves. Of all of Golgari's factions, the Devkarin press most for the expansion of Golgari territory. The Devkarin are presided over by their "Matka", a high priestess (currently Izoni, Thousand-Eyed).

A council of Devkarin shamans and rogues called the Cilia acts as a combination of Jarad's advisory parliament and spy agency and rarely all convene publicly or together at once.[2][13]

The Lotleth are the Golgari's irregular faction of undead, necromancers, fungus-binders, and other members associated with the restless dead.[2] Although most Golgari undead are mindless fungal constructions maintained by necromantic magic, the Lotleth do have some more or less intelligent undead among them, plus a few higher-ranked necromancers who speak for the faction. Generally, the Lotleth serve as a labor force for the Golgari's constant program of reclamation and expansion. The current leader of the Lotleth is Wratislav, a skilled but conceited human necromancer.

The Kraul lived for ages on the periphery of the Swarm, but are now an ascendant group with the Swarm. These six-legged insectile beings are hard-headed and literal-minded. Under Mazirek, the Kraul are loyal to Vraska, rather than to the Swarm as a whole. Their military are known as the Krunstraz.[14]

The Street Swarm form Golgari's labor class. This faction includes corpse scavengers, low-ranking street shamans, rot farmers, tunnel trolls, various elementals and fungal horrors. Each neighborhood of Ravnica tends to have its own chapter of the Street Swarm, and each chapter is led by a local swarm-boss. Spore Druids specialize in fungi, moss, molds and other decomposers. Reclaimers are elf and kraul scavengers who patrol the city and gather the dead to be recycled.[15]

Although many discount them as an urban legend, "the assassins of the Ochran" are a Golgari cult of mercenaries operating out from the Undercity and specializing in vengeance killings. The cult was led by Vraska, before she became the guild leader.[16][17] The Ochran, most of them Devkarin elves, are known for the virulence of their poisons.[15]

A delicate and sophisticated race of elves known as the Erstwhile once were an important faction in Ravnica. They were laid to rest in coffins in Umerilek, Mausoleum of the Erstwhile.[18] They returned as Zombie Attendants of Vraska. In contrast to the regular fungus-animated zombies of the Golgari, they retain a higher degree of intellegence and agency. They continue to wear their stately attire, despite its moldering and rot.[15] The leader of the Erstwhile is the lich Storrev.

Founded by parun Svogthir, a human necromancer-turned-lich, the Golgari Swarm functions as the agricultural sector of Ravnican society.[2] Following his mortal death, Svogthir reanimated his own corpse. He also modified his body by incorporating body parts from others - he used the chest of Gruul Clans parun Cisarzim, for instance, to create a more perfect, stronger being.[12][19]

Savra, Queen of the Golgari

During the Ravnica block storyline, the leadership of the Golgari was contested time and again, in large part due to the numerous factions vying for control of their guild.[8] The most prominent among these were the Devkarin (dark elves), of which Savra was the head, and the Teratogens,[10] which was predominantly composed of plant–zombie hybrids as well as, albeit to lesser extents, giant bats, gorgons, harpies, and other monstrous creatures.[8][12] Up until the events of the Decamillennial, the Teratogens maintained hegemony over the Golgari Swarm.[12]

Less than a millennium prior to the Decamillennial, the Sisters of Stone Death, originally a quintet of gorgons, attempted to overthrow parun Svogthir. Although two of the sisters died, they were successful in their coup and were able to destroy, and rot away, all but Svogthir's head, which his necromantic magic kept intact.[12] The remaining three sisters — Ludmilla, Lexya, and Lydya[6] — kept Svogthir under arrest in a tomb in Grigor Canyon.[12]

At the turn of the Decamillennial, the Devkarin, led by matka (high priestess) Savra, who, with the help of the House Dimir parun and guildmaster Szadek, overtook control of the guild. Savra resurrected Svogthir, whom she used to overthrow the Sisters of Stone Death, and then used ancient, powerful matka magic to liberate his spirit from his head, so that she could add it to her scepter. Subsequent to this, Savra proclaimed herself as the new Golgari guildmaster.[12]

Power-hungry as always, Savra then attempted to infiltrate the Selesnya Conclave with her quietmen and tried to subtly sieze control of the Conclave; but, she was double-crossed by Szadek, who snapped her neck so as to weaken the Conclave.[12]

In Dissension, Szadek is defeated with the help of Savra's brother, Jarad, who assumes control of the Golgari Swarm. He was later sacrificed by Izolda (Lyzolda, the Blood Witch) as part of a ritual to arouse Rakdos, the parun of the Cult of Rakdos.[20] Jarad, however, "survives", by using necromancy to become a zombie/lich, and retains his mantle of leadership over the Golgari.[21]

The guildhall of the Golgari Swarm in the Ravnica block is Svogthos, a former elaborately decorated and gilded cathedral of the Orzhov Syndicate. Svogthos is a semi-living structure in which the detached, severed head of Svogthir, is housed,[12] and is claimed to move as the center of Golgari territory shifts.[8]

Jarad was the next guildmaster of the Golgari Swarm.

After the dissolution of the guilds, the Golgari had stayed more or less as they were. For 10,000 years, they had been the silent machine that kept the unsavory but essential parts of Ravnica running and knew no other life apart from the dank tunnels of the undercity.

Jarad maintained his power, quelling without mercy any rumblings of mutiny or dissent from the Teratogens. He bided his time, knowing that the surface world was suffering without the structure and support of the guilds, and it was only a matter of time before things returned to business as usual.[20]

Korozda is sometimes named as the new Golgari guildhall.[2] Actually, this immense circular maze of overgrown, fungus-encrusted ruins surrounds the arched Svogthos cathedral.[18] Korozda was the lair of guildmaster Jarad and the place where he met with his irregular court of attendants. It’s patrolled by an array of swarming vermin, giant insects, and zombies.

At an unspecified time, Jarad was taken captive in a sparsely populated corner of the city. Pleased with the planewalker Vraska's role in securing the Immortal Sun in Ixalan, Nicol Bolas rewarded her with the information where Jarad was imprisoned.[22] As leader of the disenfranchised among the Golgari, she vowed to bring justice to Jarad and replace him with a worthier guild leader. She took Jarad out and became the new leader herself.[23]

The Golgari were convinced that Ravnica 's institutions were on the verge of collapse and that the absence of the Living Guildpact proved it.[24] However, the Golgari were neither surprised nor panicked by this, for they believe that all things eventually rot and die, and from this decay, new life blooms. As such, the Golgari saw the looming interguild conflict as a necessary final push to bring about a new era - their era. The Golgari were preparing for upheaval, having sealed many of the passages leading in to the Undercity, making their territory seem like an impregnable subterranean fortress.

After Vraska killed Isperia, she planeswalked to Ixalan to escape from being killed by Ral Zarek leaving the various Golgari factions fighting for supremacy. As a result, she was not present on Ravnica when Bolas' invasion began. However, she worried that the Golgari Swarm would fall apart without her, and she eventually decided to return to Ravnica out of concern for her people.

Upon returning home, she encountered Ral and Kaya in the Undercity, where they were trying to convince the other Golgari leaders to support their cause. Despite Ral and Kaya's suspicion of the gorgon, Vraska united the Golgari once again and pledged the guild to the fight against Bolas. With the help of Ajani and his team of planeswalkers, they were able to evacuate many civilians to the tunnels beneath the city, where they would be safe from the Dreadhorde.

After the War[edit | edit source]

Although Vraska was still guildmaster of the Golgari Swarm, during her absence her position was contested. The elf shaman Cevraya, the Devkarin Izoni, the troll Varolz, the kraul Azdomas, and the Erstwhile leader Storrev all claimed to have a right to the title.[25] When she returned all accepted her leadership again, except Matka Izoni. There were rumors of Devkarin rebellion.[26]

Conceived by head Magic designer and design team Mark Rosewater, dredge is a static ability that exemplifies the belief that life and death are similar.[27] It allows a player to put a number of cards from the top of his or her library into his or her graveyard if he or she would draw a card to return a card with dredge to his or her hand.

Due to its recursive nature, interactions with cards that deal with the graveyard, and strength as a mechanic, dredge has been featured in numerous competitive decks and has spawned archetypes centering on the mechanic.[28][29]

Undergrowth lets you do bigger things when you have more creatures in your graveyard.[31]

Species and races associated with the Golgari Swarm include:

Classes associated with the Golgari Swarm include: