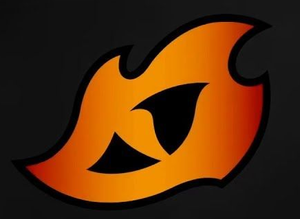 Ikoria: Lair of Behemoths makes use of monster movie tropes,[10] and is especially inspired by Kaiju (a Japanese genre of films featuring giant monsters like Godzilla).[11] The set is mostly designed bottom-up, but there are also some top-down individual card designs.[12] Monsters are the focal point of the set. Monsters are fighting other monsters, and monsters are fighting humans and their cities.[11] As in Core 2020, the Gainlands appear over the basic lands in about 5/12 boosters.

The set contains 274 cards (15 basic lands, 111 commons, 80 uncommons, 53 rares, 15 mythic rares), and includes randomly inserted premium versions of all cards. A unique Buy-a-Box promotional card is also considered to be part of the set. Cards with an alternate card frames have another card number than the original version. The Buy-a-Box is #275, borderless planeswalkers are numbered #276-278, Showcase cards are numbered #279-313, and the extended artwork cards are numbered #314-363. The Bundle promo is numbered #364, and the the FNM-treatment cards from the universal promo pack are numbered #365-369. Finally, there are Godzilla Series Monster cards that are numbered #370-387. Both regular and foil versions of most of these cards may be found in the Collector Boosters.

The set's expansion symbol is a monstrous eye. The Showcase cards are connected to the mutate mechanic. They feature a comic book style.[11] 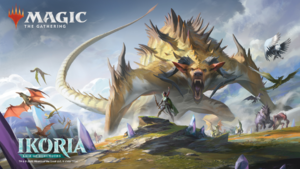 The setting is Ikoria, a plane of beasts and monsters.[13] As the world of Ikoria developed, humans quickly realized what types of defenses were needed to stave off monsters. The humans were quick to become both militaristic and ingenious. Unfortunately for the humans, the monsters of Ikoria have begun to mutate and the fortresses that were previously successful at protecting humans have now become fodder for the monsters to annihilate. Featured planeswalkers are Vivien Reid, Lukka and Narset.

The cards that represent the Story Spotlights in Ikoria: Lair of Behemoths are:

). The Collector Boosters feature a showcase version of the key art.

Each booster box contains a box topper.[14] For the box toppers Wizards of the Coast partnered with Toho Corporation to feature its iconic monsters such as Godzilla, Mothra, and King Ghidorah. These cards are called the Godzilla Series Monster cards.[11]

Each booster box has a single-card Box Topper pack featuring a foil Godzilla Series Monster card. In Japanese boosters, there are 18 different Box topper cards in foil, three of which are only in Japanese. Due to an internal error, these Japanese-only cards do not appear in English or French Collector Boosters.[15] In all other languages, there are 15 different box toppers. WPN stores will have an additional foil Godzilla card as part of the Buy-a-Box promotion.[11]

The 19th card with this treatment is the set's Buy-a-Box card Zilortha, Strength Incarnate, which only exists in its Godzilla Series form.

The 20th card with this treatment is a second Buy-a-Box card through a promotional event; this being Hangarback Walker as Mechagodzilla.[16] The card would not be a part of Ikoria set.

Godzilla Series' card are also featured Magic Online (as a part of Treasure Chests) and MTG Arena. While all 19 cards from Ikoria are featured in Arena, Magic Online only featured 15 cards (The non-Japanese Box Topper cards other than Void Beckoner, as well as the Buy-a-Box). The 3 Japanese-only cards will have their Godzilla name in their supported language in the Arena version. 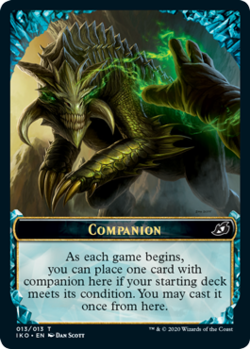 The sixteenth card in the boosters is a token, emblem, or marker with advertisements on the back side.[23] 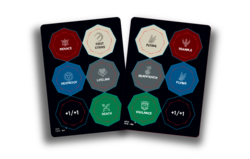 There is also a set of double-sided keyword counters on a punch card.[24] The counters correspond to the "Modal Creatures" cycle as listed below.

Ikoria: Lair of Behemoths is about "building your own monsters".[25][26] This is represented by the keyword ability mutate.[27][28] You can mutate a creature you control by paying the mutate cost and placing the card below or above a non-Human creature. They mutate into the creature on top plus all abilities from under it. A creature can be mutated multiple times.[29] Mutate was first referred to on the silver-bordered card Surgeon General Commander in Unsanctioned.[30]

The set also introduces the mechanic companion.[31][32] The companion ability lists a deckbuilding rule. If your starting deck follows that rule, then the legendary creature can serve as your chosen companion. Once during the game, you may pay

to move your companion from your sideboard to your hand. You may only play this ability as a sorcery. If your companion dies, it doesn't return to the sideboard but instead goes to the graveyard per usual.

The set makes use of keyword counters.[24][32] These were introduced on a test card in the Mystery Booster set (Recycla-bird with Flying counters). The set uses twelve different types of counters (thirteen including loyalty counters).[29] The others are bounty, foreshadow, +1/+1, deathtouch, first strike, flying, hexproof, lifelink, menace, reach, trample and vigilance counters.[28] Note that double strike and indestructible counters only appear on cards in the C20-set, and not in Ikoria itself. Some creatures gain variable ability counters, and tying into the theme of granting keywords there are several creatures that reward creatures with particular keywords (keyword "lords").

Color-wise, the set is enemy color themed, leaning into wedges for the apex predator legends and associated triomes.[32] This is reflected in the uncommon multicolor cards: three cycles of enemy-color and one cycle of hybrid ally-color signposts. Unlike Khans of Tarkir, this implementation of wedges focuses on the common enemy color (ex. for the

wedge, Indatha is primarily black, while Abzan is primarily white). Fixing is less prevalent than in Khans, and there are only ten cards (two Rare cycles) that can only be cast with full wedge mana. Overall enemy color decks are most populous with gold support, while allied color decks have minor support and full wedge decks are less likely from lack of fixing and format speed.

All allied color combinations have an archetype focused on a keyword in those color types.

The set introduces the Otter creature type and reintroduces the Shark type.[29] It also features the first standard-legal Brushwagg since Mirage (Almighty Brushwagg), and the first black-bordered Squirrel since Odyssey (Helica Glider).

Ikoria: Lair of Behemoths has 22 cycles, including two double cycles. There is also one mirrored pair.

color pair cares about flash, flash isn't something that makes sense for a keyword counter, so the black mentor instead cares about lifelink. The other allied pairs care about flying (

Planeswalker decks are discontinued for expansions.[37] For this set, they are replaced by five Commander decks (Ikoria Commander). This is essentially Commander 2020 aligning with Ikoria: Lair of Behemoths.[38] The 71 new cards in the decks are set on the world of Ikoria, but the reprints can be from anywhere. There are a handful of cards from the main Ikoria set in these decks in the reprint slots, but the number is fairly small. The cards are only legal in Eternal formats like Legacy, Vintage, and Pauper. They have their own expansion symbol and set code (C20) to set them apart.