From MTG Wiki
(Redirected from Glissa)
Jump to: navigation, search

Glissa Sunseeker was a powerful elf warrior on Mirrodin who sought to avenge her family's murder.

Glissa was a Viridian Elf living in the Tangle.[1] Her life was an ordinary one, except for her distrust of the trolls who controlled Tel-Jilad. Her distrust led her to often ignore the rituals the trolls perpetuated in order to ease the memories of the elves, and as a result, she began having vivid hallucinations she called flares. Her hallucinations became a part of her everyday life, and soon she began to ignore the strange occurrences. Her paranoia of the trolls seemed to bear fruit, for one night, they abducted her. She was taken before a mysterious troll who had no metal upon him at all. This troll called himself Chunth and explained that they had taken her to protect her. She seized a weapon and fled as soon as possible, only to discover that the trolls had not been lying.

When she returned home, she found it a charnel house with levelers milling about. She fought them, and they eventually retreated, incidentally having captured and wounded Glissa. She awoke in a vast cavern the next morning. With the help of a goblin named Slobad, she freed herself and sought out help to deal with her wound, which had become badly infected. Slobad led Glissa across the glimmervoid to the Leonin capital of Taj-Nar. There, her wound was treated and she befriended Kha Raksha. He related to her that he too was attacked in the same instant she was. An unlikely alliance seemed in order, and with the leonin help, she struck out to learn who her mysterious enemy was. This search led her deep into the Mephidross where she and Slobad encountered a dilapidated golem. The construct turned out to be sentient after Slobad fixed it, and introduced himself as Bosh. With the golem's help, the trio managed to penetrate to the heart of the dross, a structure called Ish-Sah ruled by the necromancer Geth. After defeating him, she struck a deal to spare him for information, data he was glad to share so long as it rid him of the troublesome group. This data led to the next leg of her journey, towards the Quicksilver Sea and the Vedalken city of Lumengrid. Along the coast, she allied herself with a Neurok wizard named Bruenna who desperately wanted to strike out against the vedalken overlords that held her people enslaved. After a harrowing journey across the sea, tucked safely inside Bosh, Slobad and Glissa emerged in Lumengrid. Here, she confronted the mysterious individual orchestrating the attacks, Pontifex and with help, she managed to kill him... only to have the true culprit revealed.

She began to unravel Mirrodin's secrets and found that Memnarch was responsible for the attack. She wielded the Kaldra artifacts, after journeying to acquire them, but was betrayed by the avatar when Memnarch gained control of them. It was revealed that her latent planeswalker's spark was Memnarch's final goal, but she escaped when the green sun erupted from the core. She returned to the Tangle to find it a changed place and was immediately arrested by her own people for the murder of her parents. As it turned out, her sister Lyese had not perished during the attack. After the levelers attacked at her trial, she was cleared of charges and put together an alliance of her friends and family, intent on toppling Memnarch's reign. She returned to Ish-Sah, to find Geth no longer the head of the Dross, where she became trapped in a time-bubble for five years. When she was released, she found the world totally different than as she remembered it. Taj-Nar had fallen and Slobad had been missing since her mission. Her sister had risen in prominence to head the alliance, which had barely survived Memnarch's constant onslaught. Glissa dared to dive into the heart of the world once more to end Memnarch once and for all. When she arrived in the core she found Memnarch had transformed it into an enormous spark-transfer machine, planning on using the souls of all those above to fuel it. Sadly enough, she found Slobad strapped to the machine, horribly tortured and used to engineer it. With righteous fury, she flung herself at the twisted and insane golem, knocking both herself and Memnarch into the core. Much to Slobad's surprise, her spark was accidentally transferred to his battered form, which was whole for the first time in years. After meeting Karn and learning what had happened, Slobad willingly relinquished his newfound spark and powers to save his friend, Glissa, and all the life that had been stolen to be placed on Mirrodin.

In the end, Karn left Glissa, Slobad, and Geth as the new guardians of Argentum (Mirrodin) and the Mirari. 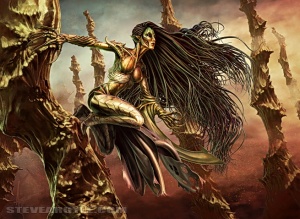 Glissa's ultimate fate after her descent into the core.

When Glissa and Slobad returned to the surface, they were set upon by hordes of panicked goblins. Glissa was separated from Slobad and retreated back into the interior, where the tiny Memnite constructs kept her safe, sound, and sleeping. Or so they thought...[2]

While trapped in the core, the elves above accused her of all the damage that had been done to their community: the destruction of the Radix, the death of many elves, and the extinction of the trolls. With the Vanishing, the only remaining beings who knew what good she had actually done were pulled from the plane. The natives of the Tangle took to calling her Glissa, the Traitor as more and more woes were heaped upon her shoulders. With the corruptive powers of Phyrexia working their way to the mana core, she too was eventually corrupted just by her proximity to the glistening oil. Compleated by Vorinclex she became the champion of the praetor and an extremely powerful warrior for Phyrexia's goal.