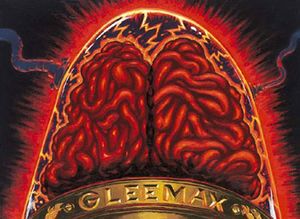 Gleemax is the name for the mythical giant alien brain in a jar that secretly runs Magic: The Gathering R&D. He is said to occupy “The Forbidden Room” in an underground lair below the corporate offices.[1] It is an in-joke among the staff of Wizards of the Coast.[2]

Gleemax is said to be first thought of on June 5, 1996, on a Usenet post entitled “WOTC R&D, Is there a brain behind it?”.[1] A user named Jeff Franzmann (a.k.a. “Canticle”) answered the post's question by stating that an alien brain in a jar of formaldehyde was in fact controlling R&D. From there Gleemax became an inside joke of sorts. Mark Rosewater included references to Gleemax in many of his articles published in The Duelist, as well as mentioning Gleemax in a number of his Making Magic articles. Gleemax was the subject of the Ask Wizards question on November 7, 2003.[3][1].

Gleemax was scheduled to appear as a card in Unglued 2, inspired by a card cut from Tempest: Mindslaver (then called Helm of Volrath).[4] Although Unglued 2 was cancelled, Gleemax was given a second chance in Unhinged.[5]

Gleemax is also the name of the website launched in June 2007 by Wizards of the Coast. It started as a viral marketing campaign involving plastic brains. Randy Buehler later revealed the website would grow into a social networking site similar to MySpace or Facebook, but specifically for gamers.[6]

On July 28, 2008, it was officially announced that it would be shut down, allegedly so the company could focus on other online projects. Critics think that it was due to lack of interest from the gamers. Since October 1, 2008 the site redirects to Wizard of the Coast's homepage.[7]