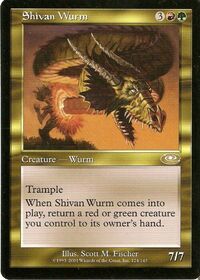 Gating is a slang term that refers to cards that require you to return a permanent (usually a creature) that shares a color with it to your hand when it comes into play, usually in exchange for a lower casting cost or higher power.[1][2] Gating cards were featured in Planeshift.

In science fiction, “gating” is a term often used to mean teleportation. This is supposedly where the slang comes from.[3] All gating cards printed are multicolored. There are 13 gating cards in Planeshift, 12 of which are creatures. Gating is primary used in white but all the other colors can have access to it when needed.[4]

The most powerful of these is the Shivan Wurm, a 7/7 trampler which could be cast third turn in a green deck with mana-producing creatures. Meanwhile, Fleetfoot Panther's gating cost can actually be a boon, as its flash ability can save a creature already in play from destruction. Any gating creature can also be useful in a deck full of creatures with comes-into-play abilities (like Flametongue Kavu, for instance), allowing you to return such creatures to your hand so you can play them multiple times.

best played as a second-turn drop. Shivan Wurm can be a solid fourth of fifth-turn drop.

One should also take note of Cavern Harpy which enabled the Aluren combo.

Not a keyword[edit | edit source]

Gating is not an ability or a keyword. If it came back one day, R&D most likely would keyword it.[5][6]

In the art of the cards, gating creatures appear to pass through a portal.[7]

Shrieking Drake in Mirage had a similar ability, though the creature could be any color. Since it costs only

and can return itself, it can be employed in many combos. To an extent, any creature with proper gating can too, but their higher, multicolored costs make them less efficient for such purposes, Cavern Harpy in the Aluren combo being a notable exception.

The mechanic returned slightly altered on white cards in Planar Chaos. No color is prescribed as to which creature needs to be returned but instead multiple creatures would be needed to be returned on some cards. These cards are Whitemane Lion, Stonecloaker, Stormfront Riders and Dust Elemental.

The mechanic returned again on the card Kor Skyfisher in Zendikar, but with the difference that the returned card does not have to be a creature, but can be any permanent you control.