Gargoyle is a creature type used for cards that depict grotesque figures of a winged humanoid or animal, incorporated into the architecture of a building, usually in the form of a waterspout. Sentient gargoyles are able to move from the architectural base and fly, despite their dense mineral nature.[1] They mainly appear in white and as artifact creatures. Gargoyles almost always have flying, and sometimes defender and an ability reflecting its awakening.

The first creature to bear the type was Granite Gargoyle in Alpha. 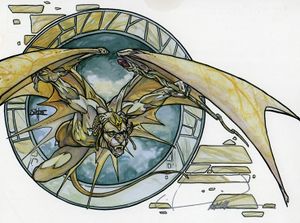 On Alara, most Gargoyles were found on Esper. They acted as the servants of wizards and mechanists to guard their towers to gather Etherium, with some being constructed partially from that metal.

Dominaria has a various host of gargoyles used by many different cultures, including the various kingdoms of Terisiare and Jamuura. Many of these gargoyles were repurposed by the following cultures, which included them in their own architecture (Kjeldoran Gargoyle).

Fioran Gargoyles are normally stone statues but can manifest illusions of themselves to harry to intruders. (Spire Phantasm)

Gargoyles on Innistrad are the creation of human runechanters and used to protect important buildings and structures, like churches and walls.

When Nahiri arrived on the plane, she used her lithomancy to enslave several of these gargoyles for her own purpose. (Stonewing Antagonizer)

Gargoyles on Mirrodin were guardians of important places on that plane, as they did not need sleep or felt fear. (Lumengrid Gargoyle)

During the Mirran-Phyrexian War, several gargoyles were aligned with the Mirran Resistance.

Ravnican Gargoyles are generally part of the roofscape of the city, with some being several thousand years old. They come to life to protect the buildings from attack or unwelcome intrusion. The Orzhov gargoyles, especially, are infamous for their ability to unleash horrific high-pitched screams that can even break bones (Shrieking Affliction) and that wake the dead.[2] Kaya used an army of Orzhov gargoyles to attack Dovin Baan's thopters.[3]

Some Gargoyles, constructed from Nullstone, have the ability to dampen forms of magic, heat, sound, and light around them.

Tarkiran Gargoyles existed first in the new timeline, where they were forged when the old Clans dissolved and aligned themselves under the dragonlords. Made from gold, they protect dragonlofts.(Dragonloft Idol)

Abbey Gargoyles were creatures created by Serra to watch Baron Sengir’s movements, and look for any other wrong-doing on Ulgrotha; they were stationed in the city of Onella at the Aysen Abbey.