From MTG Wiki
(Redirected from Gamer)
Jump to: navigation, search

Unhinged is a booster-only, tournament-prohibited Magic set, released in November 20, 2004. It was the follow-up to Unglued, and as such isn't to be considered an expansion of the official game.[2][3][4] Only the Unhinged basic lands are tournament legal.[5]

Unhinged included 135 silver-bordered cards and 5 black-bordered cards (the full-art basic lands), all of which had foil versions which occur in a similar rate to "normal" Magic Sets.[6] The set boasts many jokes, and has even set a precedent or two of its own for tournament-worthy Magic. Many cards are references to previous cards. The set is only available in English due to the difficulty of translating it. The expansion symbol for this set is a horseshoe.[7]

Unhinged features a sixth color: pink. Water Gun Balloon Game can create a pink permanent and for abilities that let you produce mana of any color, you can choose {P} pink. However, there is no Unhinged Basic Land card that can produce pink mana. In addition, Avatar of Me can be whatever the color of your eyes is, allowing brown and hazel mana.

Foil cards from Unhinged had extra jokes thrown in on the foil layer. One card, called Super Secret Tech, only exists as a foil rare card and technically affects the foil card concept as a whole. Its rarity is supposedly ten times more common than that of other Unhinged foil rare cards. 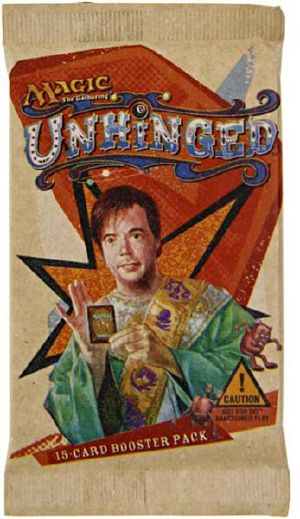 Unhinged was announced on April 1, 2004, deliberately creating confusion if it was an April fool's joke.[8][9] It was jokingly advertised as "Set 1 in the Half-Assed block". Unhinged was the first set printed with the "13+" age rating as it was the first set to come out after the "age grading" policy was implemented on all of Wizards of the Coast games (not just Magic). The five black bordered basic lands have no text box; the art covers the entire card. The release card for Unhinged was Ass Whuppin'. The Unhinged Arena League featured five alternate art promo cards (the art that was used was originally commissioned for Unglued 2: The Obligatory Sequel).[10]

Much like Unglued before it, each card in the Unhinged set -including Super Secret Tech- has a single word printed on the bottom of the card after the artist's name and card number. When all cards are placed in the proper order with other cards in the series they spell out a "secret message" detailing cards that allegedly did not make it into the set. Placing all the Unhinged cards in reverse alphabetical order will cause the following message to appear:

Several Unhinged Cards are references to "real", tournament-legal, cards, to familiar card concepts or to the Wizards of the Coast.[19][20]

Unhinged creature types were eliminated from the Comprehensive Rules list during the Grand Creature Type Update. They included:

A few cards in this set use mana symbols which only appear in Unhinged.

After the release of Unstable in December 2017, the other Un-sets received a Gatherer update.