Game Night 2019 is an introductory box set designed for casual Magic: The Gathering multiplayer play. Like its predecessor, it can be played by 2 to 5 players. It was released on November 15, 2019.[2] 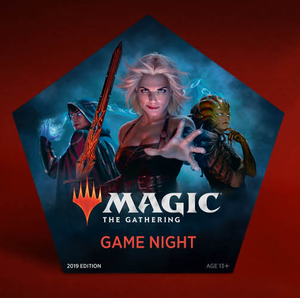 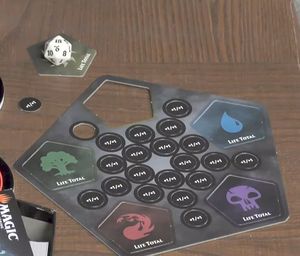 Game Night 2019 contains five balanced 60-card preconstructed decks. Each deck features a well-known archetype and comes with an exclusive foil card. These five unique cards and any other reprinted cards not already in Standard are not Standard legal. All Core Set 2020 cards in the set and all tokens for the set have the M20 expansion symbol. All other reprints (64 total) have the Game Night 2019 expansion symbol (a five edged circular saw).

The decks are designed to be recombined, as the reprints from one color can work especially well with the M20 cards from another color.[3]

The 15 tokens are packaged within each deck, divided evenly into three tokens per deck. However, due to the double-sided design of the tokens, all players will need to share a single token pile, since each deck only produces one token type, thus requiring only one side of any given token.

The tokens are packaged as follows:[4]