Freyalise was a half-elven planeswalker from Dominaria.

Freyalise cared for the Skyshroud deeply, using her own magic to protect it without a care to what happened beyond its borders. She was known for being stubborn, if not somewhat selfish in her views. However, in her final moments, she saw the greater good she could bring to Dominaria at the cost of her own life.

Freyalise was centered in green mana.

Freyalise came to Storgard as a lone child, seeking refuge from the frigid wastes. The shamans told King Miko that she was more than human to have survived, but the High Court would see her only as a daughter of the Stone Council.[1]

At Storgard, Freyalise became a fire mage and Zilgeth's successor to lead Clan Ruby.[1] She and Jason Carthalion were childhood friends, but when Oriel Kjeldos suggested leaving Storgard, King Miko (under the influence of Tevesh Szat) ordered that they duel. Jason's green magic dealt her a fatal blow, and she had its power in mind when she ascended, thus favoring green as a planeswalker. Her ascension drove her nearly mad, but she was helped by Jodah, the powerful but mortal Archmage Eternal. As a planeswalker, Freyalise wore an eye-patch, short brown hair, and preferred to float just above the ground rather than actually stand on it. 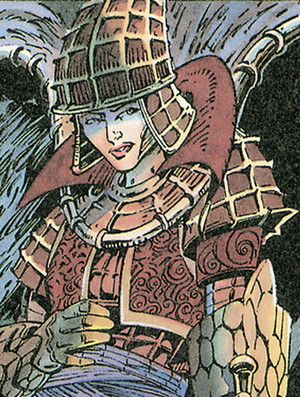 Freyalise in the Ice Age

Afterwards, she helped the elves of Fyndhorn and Llanowar survive the Ice Age and as a result became worshipped as a goddess by them. She studied the Shard in search of a way to free the worlds within, and hoped to find the answers during Faralyn's Summit of the Null Moon. She was tricked, however, since Faralyn wanted to use the energy of a planeswalker's death to escape the Shard. She fought Szat on Azoria and was left for dead after destroying all the islands of the plane.

After this, with the help of Kristina of the Woods, Kaysa, Sir Zaraya, Jodah's mirror and the Ice Cauldron, she cast the World Spell to end the Ice Age. She also armed and instructed Jaeuhl Carthalion on his quest to expel Szat from Dominaria. After she completed the World Spell, she installed the enchantment on Jodah's mirror that would cause Jaya Ballard's ascension twenty years later.

Freyalise left Dominaria after the Ice Age, 'walking to the rogue plane she had used to break the Shard of the Twelve Worlds with her World Spell.

Freyalise returned to defend Dominaria against the Phyrexian Invasion as one of Urza's Nine Titans. She fought at the battle of Koilos, then transported Eladamri and the Steel Leaf elves to Keld, where the Skyshroud Forest had appeared following the Rathi Overlay. At Eladamri's request, Freyalise cast a spell to protect the forest from the cold of the region before leaving to rejoin the Nine Titans for their invasion of Phyrexia. Of the Nine, only Freyalise, Commodore Guff, Bo Levar, and Lord Windgrace were able to activate the soul bombs they had planted throughout Phyrexia in order to gut the plane. However, they returned to Dominaria only to find that Yawgmoth himself had crossed over to the plane. Powerless against the Lord of the Wastes, Freyalise returned to Skyshroud and sent an avatar of herself to Llanowar to stand with her elven followers as Yawgmoth descended.

However, Freyalise, along with all of Dominaria, was saved by the activation of the Legacy Weapon, which seemingly destroyed Yawgmoth. As a result, Freyalise and Lord Windgrace were the only two members of the Nine Titans to survive the war. After the Invasion she erected the Martyrs' Tomb and officiated its dedication.

Freyalise resumed her xenophobic stance as she strove to protect Skyshroud from the new threats to the mana-distraught plane of Dominaria. Recent attacks from Gathan warriors and slivers resulted in Skyshroud's continued militant stance to outsiders. She refused to listen to Teferi about the threat of the time rifts. However, Skyshroud was later invaded by Phyrexians from an alternate reality. Freyalise took control of the local slivers, who were obedient to the strongest leader. This title was soon usurped by the Weaver King, who transported himself to Skyshroud through Venser. In the end, an exhausted Freyalise had a moment of enlightenment, suddenly understanding Teferi's sacrifice and realizing her own somewhat flawed and selfish stance. In an attempt to at least save what could be saved, she attempted to seal the time rift above Skyshroud, brought on by its overlay. She called back the power that she used to protect the forest from its surroundings since the overlay and pulled it into herself. In a huge blast of green and red mana, Freyalise sacrificed herself and Skyshroud to seal the rift.