From MTG Wiki
(Redirected from Fighter)
Jump to: navigation, search 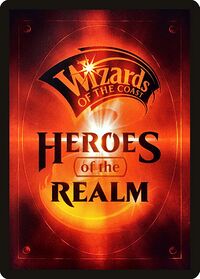 These cards are specifically created for Wizards of the Coast in very limited numbers, and handed out by the execs to some of their employees as a token of appreciation.[2] Each card includes the name of the employee who receives the card in the right bottom corner. Since these cards don't have the regular card back, the cards aren't legal in any format.

They exist also as oversized cards but with no name of the recipient. An oversized with all the names of the rewarded team hangs in the the Hall of Heroes in the Wizards of the Coast Headquarters.

Mark Rosewater notes that these don’t at go through the normal design processes, so they aren’t always representative of what R&D might actually do on a printed card.[3] The cards aren’t designed to be played. They’re designed to be read.[4]

There are four copies in existence for each one of these:

The card Optimus Prime, Inspiring Leader has the supertype Autobot, the card type Character, and the subtypes Bot and Mode.

Fighter is a token-specific class that is only mentioned in Dungeon Master as a D&D reference. The other three standard D&D classes (Cleric, Rogue, Wizard) already existed in Magic.